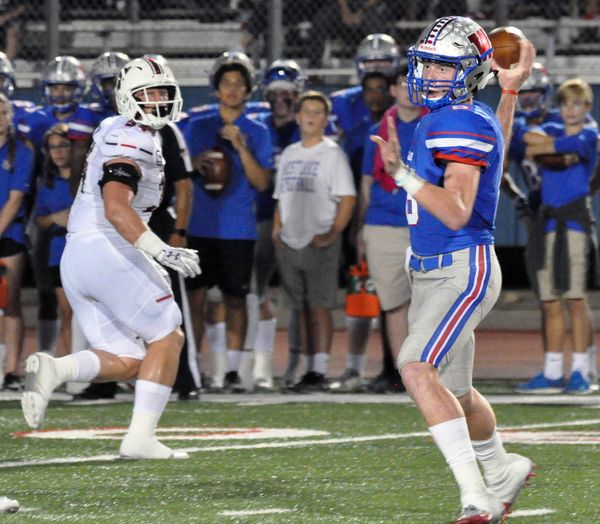 Behind enemy lines: An opposing coach's take on how to beat the Chaps and Cavs

Known historically for his innovative offenses, Chaps’ coach Todd Dodge has turned Westlake into, at least lately, a modern version of the Steel Curtain. Westlake hasn’t been scored on since the season’s second week, shutting out Akins, Austin High and Lehman before last week’s open week. The strength lies in the front seven. “Westlake’s defensive front seven is very good, better than they’ve been in the past. David Neil is tough and you have to know where he is at all times. The defensive coordinator [Tony Salazar] is really good and I’m interested to see what he comes up with in this game.” Offensively, Tripp Graham gives the Chaps a powerful running back and keeps pressure off of Taylor Anderson and Westlake’s passing game, led by receivers Mason Mangum and Penny Baker.

The Cavaliers have rediscovered a running game that keeps defenses from selling out against the passing game that features Garrett Wilson. “He’s the X-factor. There isn’t a player in central Texas who can match up with him. I think the tight end [Grayson Sandlin] is pretty good, too.” While Lake Travis’ secondary has had success in the first half of the season (opponents complete 49 percent of their passes for less than 100 yards per game), only one of its opponents has tried to throw the ball. “You can take advantage of their secondary. I don’t think they are great in the back end and you can stretch them vertically.”

Westlake: How do the Chaps decide to play thing defensively? The Chaps like to bring extra pressure, but that’s a risk-reward game against Lake Travis. In 2017, Neil found success rushing out of Westlake’s base defense. If Lake Travis stalemates Westlake’s base rush and the Chaps decide to add blitzers to the rush, that takes bodies out of pass coverage. “What do you do with Garrett? Do you double him up and try to take him away or let him get his numbers because he’s done that anyway and try to stop everyone else? Do they get exotic in the back and try to take him out of the game, because if you do, the quarterback run game becomes a big risk because there aren’t a lot of people left to tackle Hudson Card.”

Lake Travis: Can Lake Travis’ offensive line stand up to Westlake’s defensive front? “Westlake’s front seven is very good. Lake Travis is a little more inexperienced up front than they have been. Westlake tends to tell you where they’re coming from, so if Lake Travis can block that up….” Anderson has developed a rapport with Baker, and Mangum gives Westlake a second experienced outside receiver. While cornerback Copeland Gothard has big-game experience and safety Hunter Henry played extensively at Cedar Park last year, can the Cavaliers slow the Chaps’ passing attack with first-year starters Max Foit, Tag Humble and Ife Ohalete? Lake Travis has an ace-in-the-hole if necessary: Wilson played cornerback in key spots last year and picked off two passes against Westlake.

Westlake will win if: “They can win the turnover battle.” Lake Travis’ first-string offense hasn’t turned the ball over this season and the Cavaliers are plus-four in turnover margin. Westlake, according to statistics reported to MaxPreps, has a plus-two turnover margin.

Lake Travis win will if: “They can make Westlake one dimensional and force them to throw the ball.” Graham has proven to be a more-than-capable successor to Nakia Watson, averaging 136 yards per game. Lake Travis’ defensive front must find a way to keep Westlake behind the chains. Anderson completed just 10 of 21 passes for 88 yards in last year’s game with three interceptions.