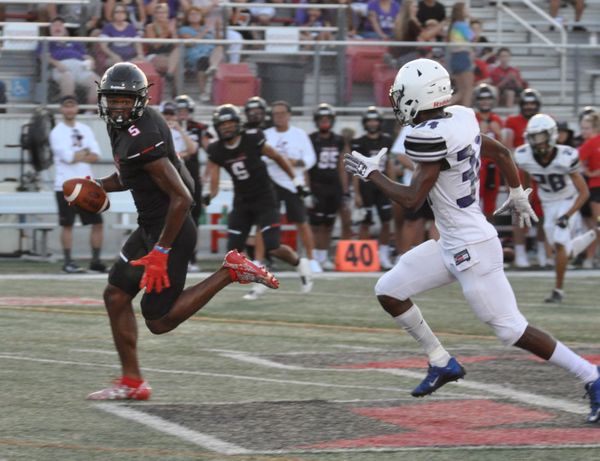 Cedar Ridge and Lake Travis, two of the area’s top teams, wrapped up their respective preseasons with a scrimmage Friday night at Lake Travis’ Cavalier Stadium.

Receivers Jaylen Ellis and Garrett Wilson each made big plays, and coaches Sam Robinson and Hank Carter said their teams welcome the return of the regular season.

“I’m beyond excited that we are playing football again,” Carter said after watching his Cavaliers go through their final preseason preparation for Friday’s opener at Arlington Martin. “It’s like Christmas morning for us.”

“Overall I was pretty pleased,” Robinson said of his Raiders, who’ll open the season at Temple.

Lake Travis scored the only touchdown when the teams wrapped up the evening with a 12-minute, game-conditions period. The Cavaliers scored on a lightning-quick, three-play drive that saw Hudson Card connect with Kyle Eaves, Jeremiah Patterson and Wilson, the last a 31-yard touchdown over Cedar Ridge cornerback Gavin Dunn.

“I thought he did the best job he could do trying to cover Wilson,” Robinson said of his defensive back. “Lake Travis showed us some things, especially their offense against our defense with their tempo that we weren’t ready for.”

Card completed 15 of 17 passes throughout the scrimmage for 297 yards and four scores, including two sets of plays against Cedar Ridge’s defense. Wilson caught six passes for 185. Greyson Sandlin, Eaves and Patterson also had multiple catches for Lake Travis.

Cedar Ridge quarterback Jalen Brown started quickly, connecting with Ellis for a 66-yarder on the first play. He completed 9 of 19 passes for 161 yards. Ethan Moron caught five passes for 67 yards. Ellis, Moron and Jeff Prinz each had catches of longer than 40 yards.

“Offensively, I think we executed some things really well and threw the ball well,” Robinson said.

Ellis simply beat the coverage on his 66-yard grab but Carter said the Cavaliers’ secondary missed assignments on the other long grabs.

“We had some coverage busts, and I’m glad they happened in the scrimmage,” Carter said. “We’ve got to get better with our coverage.”

Running back Deuce Vaughn scored an early touchdown for Cedar Ridge as the Cedar Ridge’s offense took its turn against Lake Travis’ defense. Jeric Rodriguez and Jed Kennis ran the ball well for the Raiders.

Carter said Lake Travis benefits from the chance to scrimmage Cedar Ridge, which reached the 6A, Division I state semifinals last season before falling to Allen. The Raiders have won at least 10 games for three straight seasons.

“I like scrimmaging Cedar Ridge,” he said. “They’ve got big, strong, physical, fast kids and they coach them hard. It’s a really good practice for us.”