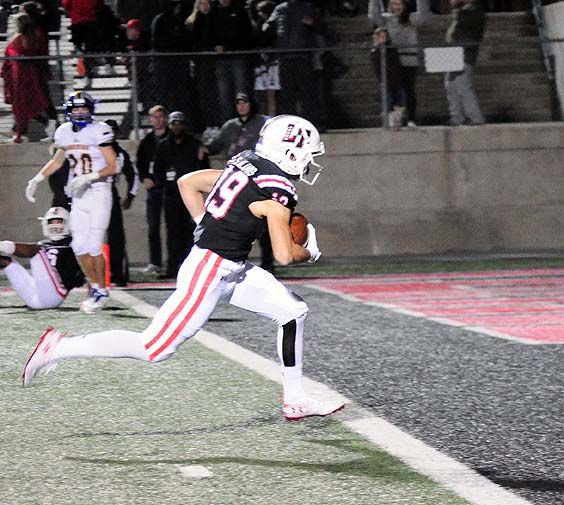 In Lake Travis’ 56-14 win over Anderson on Nov. 9, senior receiver Salvador Alanis made the most of his final regular season home game.

Alanis, who’d made five catches coming into the game, nearly doubled his season’s output with the best game of his varsity career.

“Sal can really, really play,” said Lake Travis coach Hank Carter following the game. “He has tremendous ability and we have a ton of trust and confidence in him.”

Alanis made his mark early, snaring a second-quarter pass from Hudson Card and avoiding a pair of colliding Anderson tacklers to score a 22-yard touchdown. In the second half, Alanis showed off his downfield skills, running under a pair of long Peyton Janecek passes to snare a pair of 40-yard gains. In all he caught four passes for 109 yards, both career-highs.

“It was a great feeling and a lot of fun,” Alanis said. “We always talk about feeling confident in ourselves and our teammates, and we just went out there and had fun.”

Alanis entered the game having caught mostly short passes, averaging eight yards per catch. His down-the-field exploits might have caught Anderson off-guard, but the receiver said the long plays were simply a matter of he and Janecek being on the same page when the quarterback looked at the defense.

“He just let it fly based on how the defense reacted to our alignment,” Alanis said. “He made the right read and I just went and got it. I reached out and it was there.”

The night – and weekend (he earned his Eagle Scout honor on Saturday) – only got better for Alanis and his family. Younger brother Marcelo, a running back, added a rushing touchdown in the game. It is the first time both Sal and Marcelo scored touchdowns in the same game.

“It was really neat for our family,” Salvador said. “I get to play football with my brother and this is the first time we’ve been on the same team so we are trying to take advantage of that.”

The brothers will get one more chance to take the Cavalier Stadium field together. Lake Travis hosts Smithson Valley Friday and Alanis isn’t about to be caught basking in the memory of his career night.

“This is a new week, a new opponent and new challenge we’ve got to prepare for,” he said “It’s going to be a good game.”