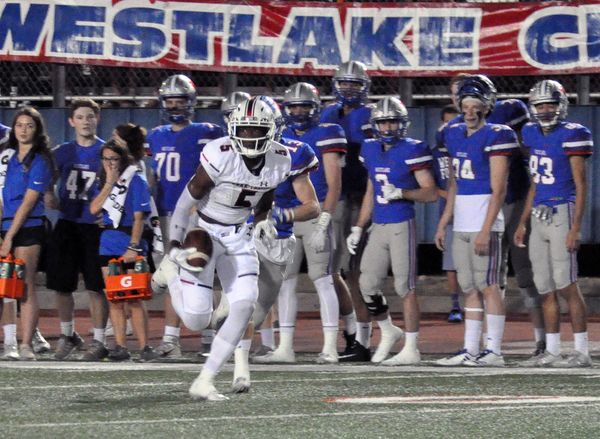 Over the past decade, Lake Travis has grown unaccustomed to losing football games, especially to arch-rival Westlake.

The Chaps’ 21-14 win over the Cavaliers last season ended a decade’s worth of frustration in Westlake (4-1, 3-0 in district) while frustrating their western neighbors. No Lake Travis (5-0, 4-0) player carries that frustration with him more than receiver Garrett Wilson, who came up short of a first down on what amounted to his team’s final attempt at a rally.

“I think about it a lot,” Wilson said. “I was really mad to be on one of the teams that lost to Westlake. We started slow and finished the same way. It just wasn’t a good week for us.”

Though the memory of last year’s defeat still stings Lake Travis’ top player, Wilson doesn’t dwell on the game. That result does bring him a little extra motivation.

“I’m looking forward to it,” he said. “I know my teammates. I know we can go out there and beat them. What happened last year is just motivation for me. I’m excited to play, to get back out there and get another chance at them before I go.”

If the Cavaliers are going to avenge the 2017 defeat, they’ll have to handle Westlake’s aggressive defense and changing looks, something they didn’t do well last year.

“They mix things up quite a bit,” Wilson said. “They are one of the more sophisticated teams that we’ll play with their defense.”

After catching passes alongside Wilson in last year’s game, Hudson Card gets his first taste of the rivalry from the quarterback’s spot – and his first look at Westlake’s pass rush – Friday night. With 20 touchdown passes and no interceptions heading into the game, Card’s handled whatever opposing defenses have thrown at him so far and he doesn’t plan on changing his process.

“I just have to trust what we’ve been taught and let it go,” Card said. “Our coaching staff puts us in position every week to go out there and play well. We want to have a good week of practice and go out and play our game.”

“I think what they did was the same game plan they use every Friday night,” Carter said. “They came out early and mixed in some tempo, but they want to control the ball and take some deep shots – they throw it well. And their defense is always very aggressive. We didn’t handle it well last year. Hopefully we’ll handle it better this year.”

Westlake quarterback Taylor Anderson worked in tandem with Watson and punished the Cavaliers when they focused too much on the Wisconsin-bound running back, rushing for 140 yards and a key touchdown. Tripp Graham replaces Watson in the Westlake backfield and has given the Chaps similar production so far, averaging nearly 130 yards per game. Penny Baker and Mason Mangum highlight Westlake’s receiving corps, and all-state center Blake Webster anchors the offensive front.

“They are a really good football team,” Carter said. “They don’t make a lot of mistakes. They have an excellent quarterback. They have plenty of kids to throw it to. From what I’ve seen, their offensive line looks like it’s gotten better every week. They are playing at a much higher level than they were earlier in the year.”

And then there’s Westlake’s defense, which hasn’t been scored upon since Sept. 7. Over their last three games, the Chaps have outscored their opponents 178-0.

“Defense is one of the strengths of their team and it’s something they’ve hung their hat on,” Carter said.

“They will do more things than other teams we’ve played, and they are really well-coached,” Card said. “We’re just going to have to adapt to the different things we see.”

Card hopes he sees Wilson – as well as receivers Kyle Eaves, Jeremiah Patterson and Grayson Sandlin – haul in his passes at the same rate they’ve done leading into the game. If Lake Travis can continue its offensive roll – Card has led the Cavaliers to 26 consecutive scoring drives in the last four games – it may bring a piece of office furniture back from the Westlake football offices.

“Yeah, they do have that trophy,” Carter said of the prize the winning school gets to showcase until next season. “They came away with the win last year. They outplayed us. Hopefully we’ll do a better job on Friday.”