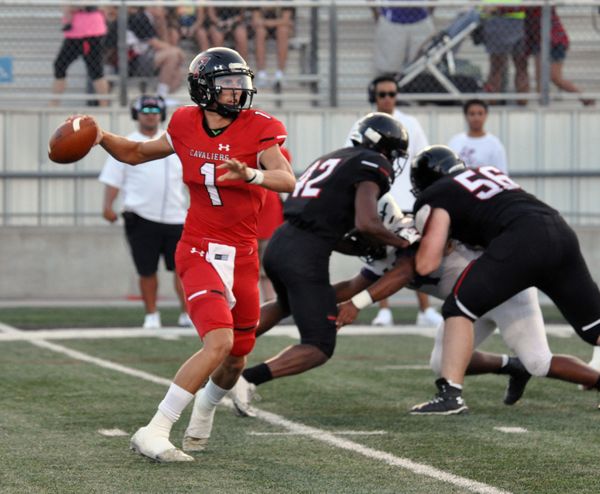 Lake Travis hasn’t done much losing lately, but when it happens, the Cavaliers don’t like to leave the score unsettled long.

As the 2018 season approaches, the Cavaliers – the top team in the Statesman’s preseason poll – have one thing on their minds: avenging last season’s 35-33 loss to Allen in the 6A, Division I state championship game.

Kind of. Full disclosure, according to standout receiver Garrett Wilson: the Cavaliers don’t care who they’d face in the title game.

Wilson will have a significant say in the Cavaliers’ quest. The Ohio State-bound receiver leads another high-scoring offense. While everyone marvels – himself included -- at what Wilson accomplishes every Friday, LT coach Hank Carter’s more appreciative of Wilson’s work ethic away from the bright lights.

“Garrett is dynamic in every way that you can be, and no one plays or practices harder than he does,” Carter said. “You can’t ask for anything more than that. Your most talented player is your hardest worker. Everyone follows his example.”

Junior quarterback Hudson Card doesn’t fall far behind Wilson on the talent scale. After an all-state season at receiver in 2017, Card’s ready to take his place in Lake Travis’ decade-long line of FBS quarterbacks. After committing to play his college football at Texas, he’s focused solely on living up to LT’s high standards.

“It’s something I’ve looked forward to,” Card said. “It’s an honor and I’m just trying to live up to it and hopefully things will go well.”

Card received a baptism-by-fire against Allen, when he quickly shifted behind center after Matthew Baldwin left with a knee injury on the first play. After nearly digging the Cavaliers out of a 21-0 deficit, Card knows he won’t face a tougher situation in 2018. He also knows he can’t make the same mistakes he made that night. To reinforce those lessons, he watched the game throughout the summer.

“It was definitely a learning experience,” he said. “There are a couple of balls that I wouldn’t throw now if I had it to do over again. I understand what I’m seeing from the defense better than I did then.”

A lot has changed since last Dec. 23. Lake Travis has a new offensive coordinator – former Louisville quarterback and Texas graduate assistant Will Stein – and a new offense that the Cavaliers must still perfect. But expectations remain the same, and Carter said his next quarterback is ready to carry the torch.

“Hudson gives us an element that I don’t know that we’ve really ever had, which is crazy to say based on the quarterbacks we’ve had come through here,” Carter said.

Card’s running ability left a lasting impression in 2017, and he’ll be a key cog when Lake Travis runs the ball this season. But don’t sleep on his arm, Carter said.

“I think most people think who aren’t super familiar with the program will think he’s a great athlete who can play a little quarterback,” Carter said. “They are going to find out that he can really throw the ball.”

Lake Travis lost three games in 2017 – the most since the 2006 season. They avenged a regular season loss to Judson by winning an Area Playoff rematch. While the Cavaliers want to reclaim control of their rivalry with Westlake, they remain focused on the biggest prize: a title win against Allen – or whoever.

“I feel like we’re going to have a great team as usual,” Wilson said. “I feel like it’s championship or bust.”