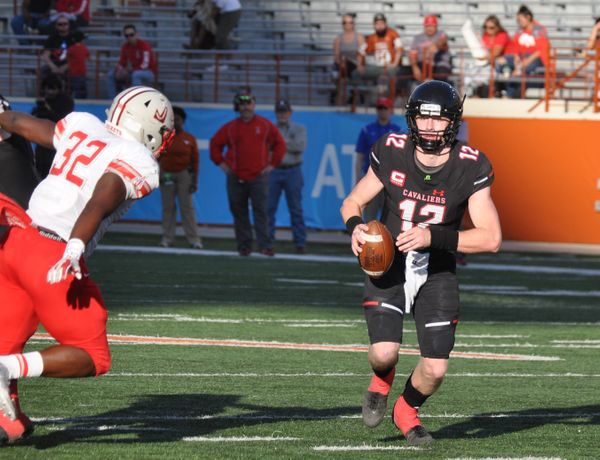 Win over Judson gives Cavaliers a shot in the arm

The Cavaliers outscored Judson 30-13 in the second half last week and will take the field Saturday at Los Fresnos’ Leo Aguilar Stadium with a new bounce in their step. But Carter doesn’t worry that his team will be overconfident coming off a signature, emotional win.

“We’ve been combatting it the other way, trying to beg our guys to understand how great this group could be, getting them to believe it,” he said.

Throughout the season, Lake Travis’ coaches have tried to prove to the Cavaliers that they can live up to the program’s lofty goals. Saturday’s game with Judson might just have done the trick. Facing an all-too-premature end to their season trailing 26-17, player after Lake Travis player stepped up during the comeback.

“I could name 15 guys who made big plays, especially in the second half, when we needed it,” Carter said. “That’s what gives you true confidence…when called upon in a stressful situation, that we have guys all over the field – special teams, too -- who can make a play to help the team.”

From sophomores to seniors, Cavaliers made plays across the field when they mattered most. Sophomore corner Copeland Gothard knocked a pass away from Judson’s Kenyon Morgan to prevent a first-quarter touchdown.

“All I could see was that he was jumping up and the ball was coming,” he said. “I just wanted to hit him and see if I could knock the ball out. The next thing I knew, I look up and I see Nathan [Parodi] telling me ‘good job.’ I thought he had caught it.”

The defense’s marked improvement from the first Judson game to last week was the most obvious improvement.

“Defensively we just played more as a group than we did in the first game,” Gothard said. “We executed a lot better.”

The biggest thing Lake Travis’ defense did, Carter said, was get its second wind after a warm, frenetic first half.

“When it’s big guys and the quarterback is strong and fast and the guys they are handing the ball to are big, strong and fast, it’s like taking body blow after body blow in a boxing match,” Carter said. “By the end, you’ve got nothing left. We hung in there after taking some big shots and we had something left in the tank. I’m proud of that.”

“The way they were covering everything, it looked like they were rotating and trying to jump other routes,” Fuentes said. “My routes came open, and with our play-calling, it just kind of happened that Matthew [Baldwin] looked my way.”

Carter said all of Lake Travis’ receivers came up big throughout the game. Wilson starred with three touchdown catches and Hudson Card caught a touchdown pass and rushed for what proved to be the go-ahead score in the fourth quarter.

“Alec Fuentes made some huge catches,” Carter said. “The way that Garrett Wilson came back from cramping. We may have given him one defensive series off but then he was right back out there playing both ways. How gritty and tough he was. Card was banged up all day. He got the snot knocked out of him but just kept popping back up.”

And Carter pointed out Baldwin. After missing the playoff opener against San Antonio Madison with a sprained ankle, Baldwin returned to the lineup and stood at the center of the Cavaliers’ third quarter rally. He lofted a deep pass that Wilson turned into a 73-yard score to start the rally and found receivers time and again against a Judson pass rush that couldn’t get home.

“The way that Matthew threw the ball in the second half was, well, I don’t know that I’ve seen any of the guys with their jerseys hanging on the wall perform any better in situations like that,” Carter said.

In the second half Baldwin completed 15 of 19 passes for 209 yards and two scores while picking up some gritty yards on the ground, including the final first down that allowed the Cavaliers to run out the clock.

Carter hopes the Cavaliers take the confidence they earned from the win and lean on it moving forward.

“Going forward, I don’t think there will be any doubt no matter who we play from here on out that we can do it,” he said. “Now, you still have to go out there and make it happen, but I don’t doubt our ability to win a big game.”