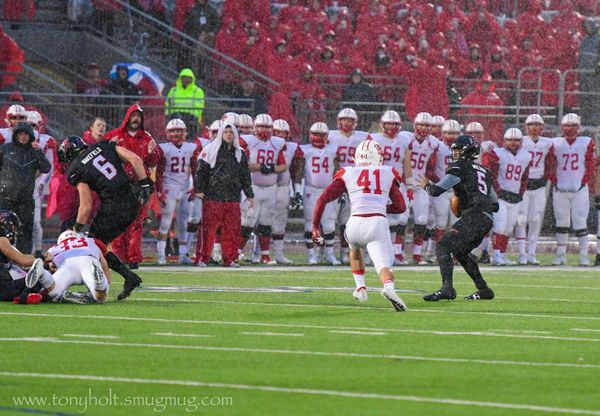 Facing unbeaten Katy in less-than-favorable conditions Saturday in San Antonio, Lake Travis pushed its chips to the center of the Alamo Stadium field and hit the jackpot.

“Out of respect for Katy, we’re not going to save any plays for next week, if there isn’t going to be a next week,” Lake Travis coach Hank Carter said.

Two plays loomed large in Lake Travis’ 28-14 win over the Tigers and their suffocating defense that had allowed just 72 points all season and 48 in the last 11 games: a second quarter touchdown pass from Hudson Card to Garrett Wilson and a fourth quarter scoring strike from Wilson to Card. Both touchdown passes came when neither Card nor Wilson had lined up at quarterback.

With the game tied at 7-7 early in the second quarter and Lake Travis moving after the Tigers had missed a golden opportunity to take the lead, offensive coordinator Mike Wall called for a twist on a play the Cavaliers had run several times already to little avail.

With Wilson lined up wide right, Card came in motion from the left and took the ball from Matthew Baldwin on a speed sweep.

“That was something that we’ve shown a lot,” Wall said. “Anything that you do offensively, if you continuously do that and don’t run something off of it, it’s not very hard to defend.”

As Card sprinted with the ball toward the right, Katy’s safeties sprinted toward the line of scrimmage while Wilson faked a block and took off toward the end zone.

“We had run some speed sweeps and power reads earlier in the game and we were getting minimal gains on it. Why? Because their secondary guys are triggering downhill fast and they were stopping us for three-yard gains. I felt like with the way their safeties were triggering, even though we beat the corner on that play, I felt like we’d get a big ol’ bite on it, and I knew Hudson was going to put a good throw on it.”

Card lofted a pass that hit Wilson stride for a 42-yard, go-ahead touchdown.

In the fourth quarter, Lake Travis clung to a 21-14 lead when Baldwin injured a leg on a quarterback keeper near the Katy 30-yard line. As Card quickly took some warm-up throws on the sideline, Wall saw an opportunity.

“A quarterback goes out, so let’s put in another quarterback,” he said. “That’s why the timing happened right there. I felt like that was the ideal time to use that play.”

Instead of Card, senior Russell Thamm took the field at quarterback with Card lined up in his usual spot on the left of the formation and Wilson lined up to the right. Thamm took the snap and quickly slung a lateral to Wilson, mirroring a quick screen the Cavaliers had showed Katy several times. Again, the aggressive defense bit.

“You’ve given them a reason to rally to the football whenever they see this play,” Wall said. “Garrett’s touchdown pass was kind of already set up. It was designed for an aggressive defense.”

As Card did in the second quarter, Wilson hit Card in stride behind the defense for the touchdown that iced the win.

“We work on it all week and that one worked every time in practice,” Wilson said. “We expected it to work and it did.”

In Wall’s weekly planning, trick plays have become such a staple that few around Lake Travis think of them as “trick” plays any more.

“Coach Wall’s got plenty of things cooked up,” Carter said. “They are kind of trick plays but to me that’s just part of our offense. It’s part of what makes Mike such a good play-caller. He’s just so creative in the ways he puts our kids in position to make some plays.”

For Wall, that’s the key: to put the Cavaliers’ playmakers in position to utilize all of their talents.

“I try to maximize the talents of our kids,” he said. “Obviously our receivers should be able to catch, but whenever we’ve got one who can throw…”

And Wall has more than one. In addition to the Ohio State-bound Baldwin, three other Cavaliers have thrown touchdown passes in a game: Kyle Wakefield, Card and now Wilson. Though he’s started just one game at the position, Card’s already received a handful of scholarship offers as the next Lake Travis quarterback, and Wilson played quarterback prior to converting to receiver last season.

While the two plays worked to perfection against Katy, it’s unlikely Wall will bring them back in Saturday’s title game against Allen. He’ll spend time this week analyzing the Eagles’ defense to see if he can come up with a little something extra once – or twice – again.

“There’s always something we’re trying to do to take advantage of something we see in that opponent’s scheme, their aggressiveness or a particular player,” he said. “It’s just part of the planning.”