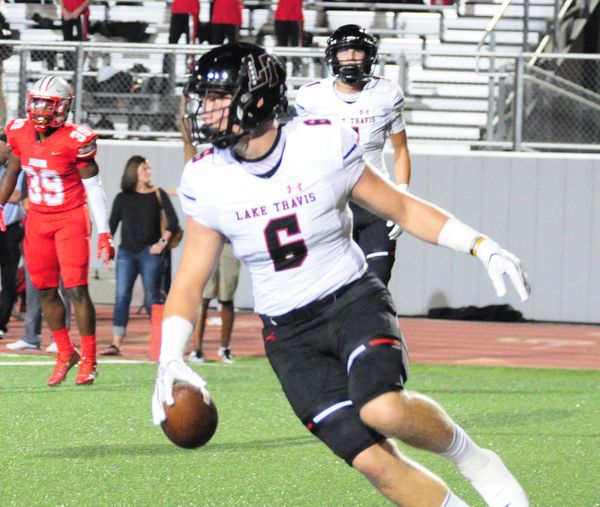 Patience pays off for Wakefield, who scores pair of TDs as Cavs' new tight end

Patience is not necessarily every teenager’s best virtue, especially when the teenager is a football player with a penchant for catching the ball.

But two years of patience paid off Friday night for senior Kyle Wakefield. After watching, and even changing positions, as Cade Brewer blossomed into an all-state tight end, Wakefield delivered, catching a pair of touchdown passes in the Cavaliers’ season-opener. While he made his offensive debut Friday, Wakefield started last season’s opener against Judson, as a defensive end.

“I just wanted to find a way to get on the field [last year],” Wakefield said. “Cade was obviously the ideal tight end.”

With Garrett Wilson and Hudson Card providing deep threats, Wakefield stayed close to the line and found open space in the Judson defense. Wakefield finished with six catches, all of them in the first half as the Cavaliers matched the Rockets score-for-score until late in the second quarter. As Cade Brewer did with Charlie Brewer, Wakefield made the tight end a reliable target for Matthew Baldwin and rekindled a quarterback-receiver relationship that dates back to elementary school.

“I think Matthew’s my boy,” he said Sunday. “We’ve been playing football together since we were kids. I think we’ve been on the same 7on7 team for eight years.”

Wilson, Card and Wakefield combined for 23 catches and 388 of Baldwins’ 435 passing yards. In all, Baldwin connected with six different receivers and showed he could get the ball to whoever had the best match-up, a trait he honed while watching Charlie Brewer a year ago.

“Matthew knows how to get us the ball,” Wakefield said. “I think we can do big things.”

And though he’s played just one game in his new position, the second-year varsity player knows what the Cavaliers must do to get back on track after the season-opening loss.

“This week will be hard,” he said. “Everyone on both sides needs to focus. Both the offense and defense could have played better Friday night. This is a team job.”