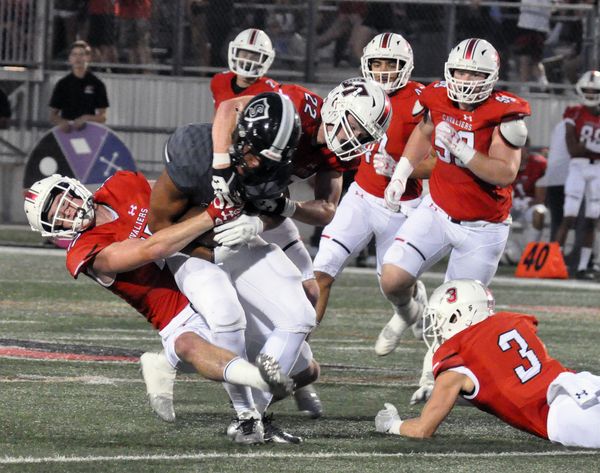 Newcomers adapting to more than just football at Lake Travis

Newcomers Kaleb Wenson and Bryce and Brayden Roeder are getting much more than a crash course in Travis football this fall. They’re getting their first look at the world of Texas high school football.

“At our first game here, there were what, 10,000 people there?” said Bryce Roeder, who moved to Lake Travis in January, “Judson’s got a big stadium and it was packed.”

“We played in front of maybe 500, 600 people at the big games in the playoffs,” said Brayden, thinking back to last fall when the twins helped St. Thomas More reach the Illinois state playoffs.

In other words, as the saying goes, everything’s bigger in football. While other states – Georgia included – play high-quality high school football, Wenson said the focus – both at the school and in the community.

“The community is more involved,” Wenson said. “In Georgia, football was the fun place for the kids who didn’t play just to go hang out. Here, it’s the opposite. The students come out, but the community presence is much greater.”

Community involvement isn’t the only difference. As Wenson explains to friends back in Georgia when they talk, Texans simply expect more of their football programs.

“They push us a lot harder and expect a lot more out of us here,” Wenson said.

Part of those expectations involve playing style. The Cavaliers pride themselves on playing smarter football than their opponents, and the Roeders noticed that emphasis – and difference – shortly after arriving.

“You’re forced to play smarter, and that’s one of the things that makes Lake Travis great, the discipline and the ability to play smarter football,” Brayden said.

While all three are new to Lake Travis, they knew they were moving for as long as a year and had time to do their homework. While they were helping their St. Thomas More team to the playoffs, the Roeders began following Lake Travis.

“Throughout my football season, I was following what Lake Travis was doing,” Brayden said. “I saw that they would just keep on winning, and then they are in the state championship and I was like, ‘wow, these guys are pretty good.’”

“All three of those kids are going to make a tremendous amount of plays for us this year,” he said. “They are good, smart, hard-nosed kids.”

The Roeders are finding their way playing linebacker and rover in the Cavaliers’ defense, and Wenson splits time with Blake Dollar alongside Kade Langston in the defensive front. Wenson’s still working himself back into shape after injuring his knee late in his last season in Georgia while learning how Lake Travis does everything from practice to play.

“Kaleb’s coming off an ACL injury, and he’s really only played three years of football,” Carter said. “He didn’t go through spring with us, so coming into fall camp, everything was new for him: The way we lift weights, the way we practice, the speed at which we practice and the reps that we get.”

The Roeders had a similar learning curve, and while Lake Travis’ defense took its lumps against Judson, Steele and Jesuit, a shutout against Hendrickson has everyone in the locker room encouraged.

“That was the best feeling,” Wenson said Monday. ”We’re just now starting to put it all together, what the plays are, things like that. We have a bunch of sophomores. We’re all new. I think we just needed a little more time to figure out.”

“We just needed to know that we can do it,” he said. “Now that we shut out Hendrickson, our whole defense knows that we can be great if we just play together.”

“It’s much different for all three of them compared to where they’ve come from,” he said. “They are adapting well and they are up to the challenge.”