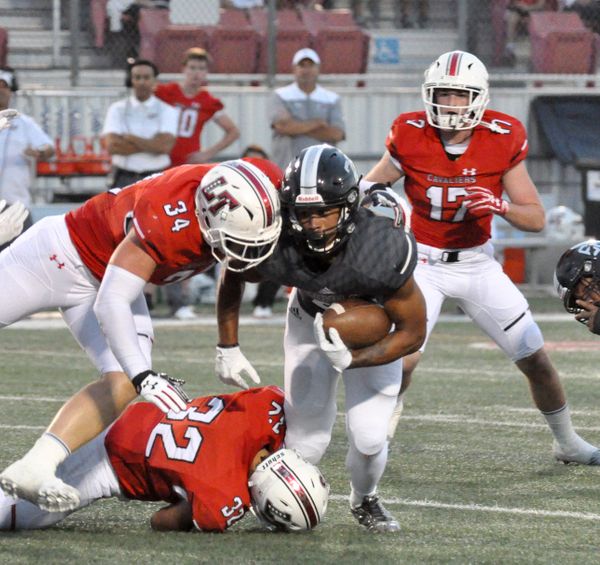 One year after a last-second field goal sent Lake Travis into overtime against Steele, Dicker withstood an earlier miss and three consecutive timeouts before converting the winner.

“I got a fresh start after I missed earlier,” he said. “It was cool to get a chance to make the winning kick. I was fine with him calling those timeouts. We do that every day in practice. I’m used to that kind of stuff.”

Dicker got his chance after Lake Travis’ defense came up with a rare second half-stop, forcing the Knights to punt with two minutes left. Matthew Baldwin led the Cavaliers into field goal range with a 17-yard completion to Kyle Wakefield and a 10-yard run, and LT turned again to its kicker despite his miss minutes ago.

“I couldn’t have been more confident in him,” Lake Travis coach Hank Carter said. “There was no doubt in my mind he would make the kick, especially after he missed his last one.”

Early in the game, a last-second, game-winning field goal seemed out of the question. Dicker hit a 22-yarder early and Baldwin threw touchdown passes to Wakefield and Hudson Card as the Cavaliers raced to a 17-0 lead.

Steele fought its way back into the game on Brenden Brady’s shoulders. Brady rushed for 210 yards on 29 carries with two scores as the Knights tied the game early in the third quarter. The teams traded touchdowns throughout the second half. Baldwin hit Wakefield for a second time and added a 17-yard touchdown run for Lake Travis. Onyx Smith rushed for a score and Terrance Ingram added a 62-yard catch-and-run for another score.

Baldwin completed 27 of 38 for 335 and three scores to lead Lake Travis’ attack. Garrett Wilson caught 10 passes for 163 yards and added two key defensive plays in the second half help the Lake Travis effort.

“To get the chance to make a big kick against them again was pretty cool,” Dicker said.