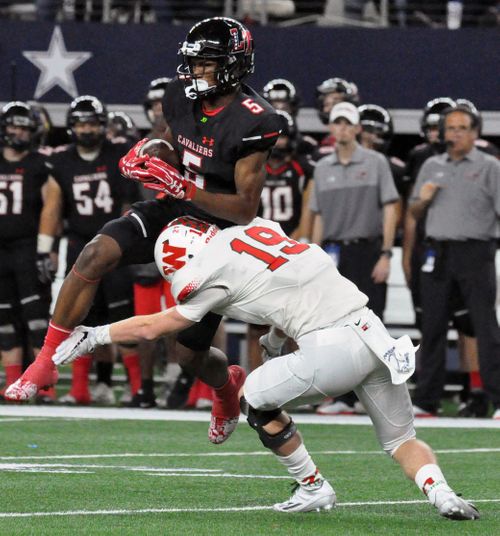 After following seniors' lead, Wilson ready to step up

When he lined up against Converse Judson to start his varsity football career last year, then-sophomore receiver Garrett Wilson had a big case of nerves.

“I thought I played okay but before the game that was the most nervous I’ve been,” he said in November 2016. “I was nervous until the first catch. I was running around, shaking, thinking about if I was doing everything right.”

Those around Wilson knew before he did that he would do a great many things right, and over the course of the season, the young receiver proved them correct. He showcased his athletic ability and versatility throughout the season, capped by a state championship game showing where he caught a touchdown pass, threw a touchdown pass and, for good measure, blocked a kick in the 41-13 rout of The Woodlands.

Wilson finished his first varsity season with 53 catches for 699 yards and 14 touchdowns, then starred for the basketball team, averaging 17.7 points per game while helping the Cavaliers to a trio of playoff wins. Football and basketball fans chronicled Wilson’s summer in a Twitter-storm of highlights from the state seven-on-seven tournament and basketball tournament action from his TJ Ford Basketball team.

“There aren’t many things I can say to accurately describe what he’s shown athletically and jump he’s made since last football season to how he’s looked this spring and summer,” Lake Travis coach Hank Carter said. “He can do things with his abilities that are just amazing, but I love the way he competes and his willingness to jump in and help wherever he can. That’s awesome, and that spills over to the rest of our guys.”

Carter already raves about Wilson’s potential willingness to step in and help at cornerback if needed in the coming season, but Wilson’s primary focus as practice begins is helping a bevy of new starters get comfortable. He wants to encourage the next group of Lake Travis receivers the way recent graduates such as Cade Green encouraged him.

“I think I learned the most from Cade Green,” Wilson recalled. “When I was first on the team [late in his freshman season], he helped me out. Things like making sure that when we ran sprints, I ran with [the starting receivers]. It’s a lot of little stuff like that, but it makes you feel better.”

Wilson knows from experience the better his teammates feel, the quicker they will adapt to their larger roles. He knows he must lead by example and help a group of unheralded but promising first-teamers.

“It feels good to know people are going to be looking up to me,” Wilson said. “It’s definitely some extra pressure but this is the role I'm used to so I can handle it.”

The advice from Green he hopes to impart on his new first-team colleagues?

Wilson took Green’s advice himself last year and certainly made a name for himself. He proved both on the gridiron and the hardwood that he can handle most anything he comes across. College coaches have noticed. At last count, he holds scholarship offers from at least 10 FBS schools and a handful of Division I basketball programs. He learned a lot about time management over the busy summer and hopes to continue to balance both sports – at least through his high school graduation.

“I’ve always loved basketball and it’s always been my favorite sport,” he explained. “But I feel like I have more opportunity in football. I’m going to keep playing both throughout high school. I love both of them. Always have.”

For the next few months, basketball will have to wait its turn. While Wilson relishes his next opportunity to bring the house down with a breakaway dunk, his current focus is doing his part to help the Cavaliers take on the preseason 6A top-ranked team according to Dave Campbell's Texas Football: Judson.

Lake Travis holds an intrasquad scrimmage on Friday and will scrimmage Cedar Ridge next weekend before taking part in Fox Sports Southwest’s First Weekend Celebration. The Cavaliers and Rockets will play in Converse on Sept. 1. The game will be televised live by FS1 with an 8:30 p.m. kickoff.