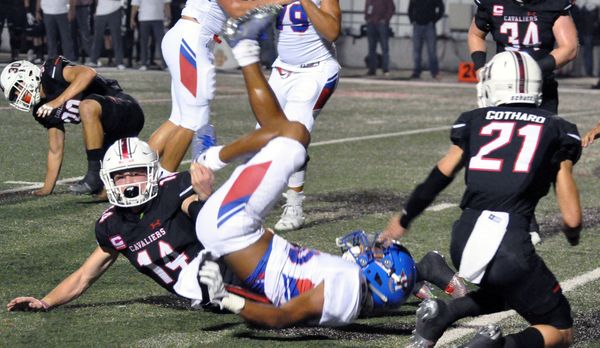 The area’s top to 6A football teams renew their rivalry tonight when Lake Travis (4-1, 1-0) visits Westlake (6-0, 2-0). The annual Battle of the Lakes will decide who gets western Travis County bragging rights and the inside track to the District 25-6A title.

“We’re all excited,” said Lake Travis defensive tackle Kade Langston. “We know it’s going to be a great crowd. There will be a lot of energy in the stadium and that’s exciting.”

Both teams enter the game ranked in the Associated Press 6A Top 10 poll: Westlake ranks fifth, Lake Travis seventh. And despite its recent dominance in the series – the Cavaliers have won 11 in a row over the Chaps – Lake Travis’ players know the outcome of Friday’s game will be decided, well, Friday.

“Last year’s team can’t help us at all Friday night,” said quarterback Matthew Baldwin, “no matter how great they were. We have to do this ourselves.”

Baldwin points out that both teams lost a sizable number of seniors, and while a few familiar faces remain from last year, the bulk of both teams are new. His teammates echo his thought.

“I don't think that what we have done in the past against them means much to us,” said defensive back Nathan Parodi. “Coach [Hank] Carter emphasized that this team hasn't beaten Westlake yet, so we are going out there treating it like we would against any other team we play.”

“This team is 0-0 against Westlake,” Carter said. “What happened last year or what happened 10 years ago really doesn’t matter.”

Lake Travis enters the game off its bye week. The Cavaliers used the week to fix some of the things that have plagued them, especially defensively, over the first half of the season. Aside from a shutout of Hendrickson, opponents have scored 65, 31, 45 and 34 points.

“We haven't played up to our potential this year so far on the defensive end,” Parodi said. “But, I think with the much-needed bye week, we will feel more comfortable with what we are doing on the field and we will execute a lot better.”

Following the Cavaliers’ most recent game, a 60-34 win over Hays, Carter posted a list of things in his office that his team needed to improve upon – from alignment to technique to simply executing the plays as called.

“We got better as a team last week,” he said. “We were able to slow down and pay attention to some of the things we can control. It’s what we needed, a chance to work on the things we need to work on to become a better football team and accomplish our goals.”

The Cavaliers also began focusing on unbeaten Westlake. Offensively, the Chaps are much more than bruising running back Nakia Watson. Junior quarterback Taylor Anderson continues to develop and complement’s Watson’s running with his ability to run and also spread the field with his passing.

“They are tough to defense because you can’t zero in on one thing,” Carter said. “They have a dynamic running attack but they can also throw it well. This is a complete offense.”

Anderson played the bulk of both games against Lake Travis after the Chaps lost Sam Ehlinger to injury, and his development has impressed the Lake Travis coach. Anderson’s completing nearly 60 percent of his passes for 1,128 yards and 10 touchdowns. He’s added 413 yards rushing to keep teams from focusing solely on Watson (985 yards rushing).

“Their quarterback is much improved over last year, and so are the receivers,” Carter said. “Just like we expect of our kids, they are better now after having played a lot last year.”

The Cavaliers know stopping the run is their top priority, but they must defend the whole field.

“The defense must have a solid game for us to win against a well-disciplined Westlake offense,” Parodi said.

Despite allowing opponents to score more than usual, the Cavaliers have lost just once because their offense has scored 34, 64, 48 and 60 in its last four games. Even in the season-opening defeat, Lake Travis scored 45 points.

“Our offense has played well and truthfully we feel unstoppable,” receiver Garrett Wilson said. “If we do what we do, we should put up big numbers again.”

“They love to blitz and will do it from just about every angle, so we’re working on that,” he said. “We’ve got to be ready for what they throw at us.”

Baldwin also knows that Lake Travis’ offense will get its chance to make plays.

“They are a smart and disciplined team, just like us, so we’re going to have to take advantage of what they aren’t doing,” he said. “We feel like we have a couple of guys who can win any matchup.”

Winning the matchups will depend largely on who handles the frenetic rivalry atmosphere better. Both teams have played their share of high-stakes games over the years, mostly against each other. While the Cavaliers say the recent history won’t help them win Friday, they understand the Chaps may bring extra motivation into the game to try and stop the skid.

“Maybe they feel a little more pressure in this game than we do, but this football team has never beaten Westlake,” Langston said. “Yes, maybe Lake Travis has always beaten Westlake, but this is a new football team just like it is every year. We can’t take anything for granted just because we have beaten them before. It’s always going to be a battle.”