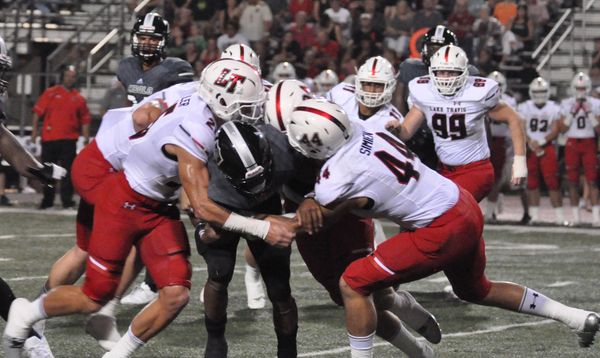 Lake Travis won the only previous meeting, in the Regional Semifinal round of the 2013 playoffs. In that meeting at Waco ISD Stadium, Jesuit used a quick passing attack to take a 24-21 lead before the Cavaliers ran off 34 straight points. The Rangers had no answer for Shaun Nixon, who set a Lake Travis school record with 334 yards rushing, including touchdown runs of 65, 56 and 23 yards among his five scores.

Both Jesuit and Lake Travis have questions at quarterback tonight. For the Cavaliers’ Charlie Brewer left last week’s game against Steele after sustaining a hard hit and was placed in concussion protocol this week. By all accounts, he’d met each threshold and barring a late-week setback could be available to start for the Cavaliers. If Brewer can’t play, the Cavaliers will call on Matthew Baldwin, who engineered a pressure-packed comeback to lead Lake Travis past Steele. Jesuit quarterback Jacob Palisch, the District 9-6A Player of the Year in 2015, left the Rangers’ opener with an injury and hasn’t played since. Parker Towns started last week’s Jesuit game and figures to start again against the Cavaliers.

Lake Travis still has plenty of defensive questions after facing dynamic quarterbacks Julon Williams (Judson) and Xavier Martin (Steele). Towns may not be as explosive, but he’ll rely more on a large offensive line that paved the way for the Rangers to rack up 440 yards of offense. Lake Travis has allowed (gulp) 548 yards per game so far.

“I thought we fixed some of our issues from Judson against Steele,” Lake Travis coach Hank Carter said. “We’ve still got a lot of work to do, though. It’s a lot of new faces and we’ve got a lot to learn, and we played two explosive offenses that really magnify mistakes whenever you make them.”

If this week’s practices can be an indicator, then players feel the defense will pick up its play quickly.

“Practices have been much better,” said senior defensive end T.J. Simien. “Everyone has been getting to the ball much better, and that was a problem in the last two games.”

In the win over Steele, Lake Travis produced some big plays – four touchdowns came on plays longer than 19 yards. Jesuit’s defense allowed 560 yards to Plano East last week, including three scoring plays of 69 yards or longer. Carter said the Rangers have been aggressive early in the season, trying to create big plays. Offenses sometimes can take advantage of that style. Brewer, coming off his best game, and Baldwin, coming off an impressive relief debut, will look to keep Lake Travis' offense rolling.

Jesuit has been able to strike a healthy run-pass balance thus far. Against Plano East, the Rangers rushed for 218 yards and passed for 222. Evan Jackson (171 rushing) enjoyed a career day while Towns played a solid game in his debut. Jesuit hopes that balance can keep the Lake Travis defense guessing. The Cavaliers, meanwhile, struck a different kind of balance. The quarterbacks spread the ball around, involving all five receivers in the passing game, making Steele cover the entire field and creating a mis-match somewhere.. Both Cade Brewer and Maleek Barkley caught 10 passes and Garrett Wilson added eight. Cade Green and Mac Humble also figured in the passing game against Steele. Green, last year's leading receiver, has yet to have a breakout game, averaging 3.5 catches per game after a 72-catch season in 2015.