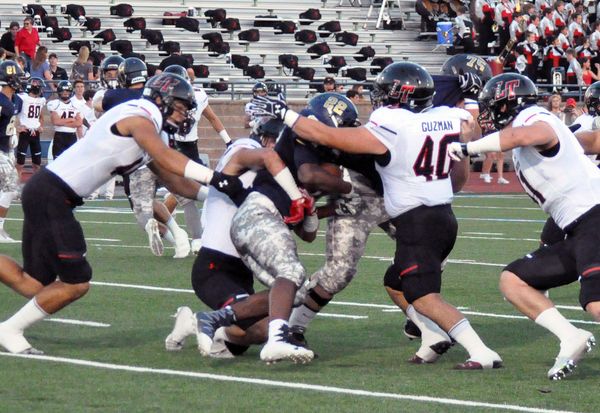 What to watch for – Hays

Behind the breakaway running of Maleek Barkley (287 yards on 14 carries in the last two games), the Cavaliers have been just as damaging to opposing defenses on the ground as they have been through the air. Imposing their will by running successfully when the defense knows it’s coming is something the Cavaliers want to establish.

“We need to continue to get better,” head coach Hank Carter said of the running attack. “It’s hard to argue when you have big plays and go score, so we want to keep doing that. We want to be able to impose our will offensively.”

Of course Carter wants to see Lake Travis continue to throw the ball efficiently as well. Charlie Brewer’s completed 73 percent of his passes for 1,029 yards and 13 touchdowns this season, spreading the wealth among five different players who’ve caught touchdown passes.

By their own admission, Lake Travis’ young defensive linemen know that Jesuit and Hendrickson weren’t as dynamic offensively as Judson and Steele, but they feel like their unit continues to make strides after a rough start.

“Overall we started off pretty slowly, but we’re starting to catch up with the speed of the top teams in the state,” said Cesar Guzman, a senior defensive tackle. “We’re just trying to get to where we were last year.”

After allowing nearly 100 points and more than 1,000 yards of offense to Judson and Steele, the Cavaliers have tightened things up, allowing just 17 points and barely 500 yards to Jesuit and Hendrickson. Carter’s noticed the improvement in the way the group has played, something he wants to see continue against Hays.

“Our defensive line is playing things better than they were, regardless of who we’re playing,” Carter said of a group that includes first-time starters Kade Langston, Kyle Wakefield and Guzman along with Drake David and Reid Bacon. “The guys are playing with confidence now and we want to build on that. They have to earn it though. We’re only feeling better because they are playing better.”

In the early part of the season, Lake Travis has suffered its share of nagging injuries. With arch-rival Westlake on the immediate horizon, Carter surely would like to see some of his players who’ve missed time this season – defensive tackle Sammy Ochoa, linebacker Aidan Estrada and cornerback Aaron Brown-Nixon in particular – to make it back for the Rebels to get game repetitions before the Chaps come calling on Oct. 7.