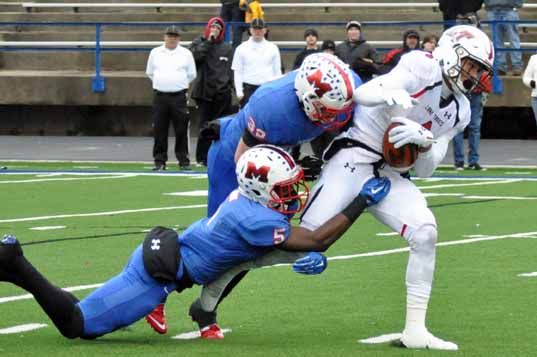 Friday’s 6A, Division I, Region 4 championship game gives Central Texas football fans a second look at one of the area’s marquee rivalries when Lake Travis and Westlake meet at the Kelly Reeves Athletic Complex.

For Lake Travis, the rematch marks the sixth time in its playoff-going history, which began in 2000. The Cavaliers have yet to lose a second game against a team in the same season. The history:

Notes: The regular season meeting came in the season-opener. The third-round playoff meeting came on a frigid afternoon in Temple. Maleek Barkley's big day sparked the Cavaliers to the win.

Notes: Lake Travis reclaimed the district 25-4A title in the regular season finale, then dashed the Timberwolves' playoff hopes on Brock Kenyon's late interception at DKR.

Notes: Cedar Park wrapped up an undefeated regular season by snapping Lake Travis' 48-game district winning streak, forcing four turnovers in the 35-21 win. The Cavaliers got the last laugh, though, stopping the Timberwolves 21-20 on their way to a fourth-straight state title. Dylan Bittles' sack of Cedar Park quarterback Ethan Fry on fourth down in the final minute sealed the win for the Cavaliers.

Notes: The Cavaliers rallied furiously to beat Johnny Manziell's team in the regular season, then won a shoot-out in the playoffs. Colin Lagasse quarterbacked the Cavaliers in the regular season win and also sealed the game with a fourth-quarter interception of Manziell. Cameron Wrinkle returned a kickoff for a touchdown and Michael Brewer's big night helped the Cavaliers advance in the playoffs. Tivy finished the season 10-2.

Notes: District foe Killeen offered little resistance in the regular season and even less in a playoff game held at DKR.