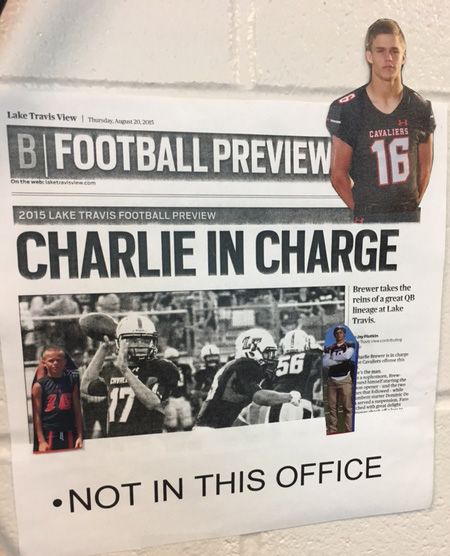 Taped to a board in Lake Travis offensive coordinator Mike Wall’s office, visitors find a piece of art that sums up the coach’s relationship with his senior quarterback, Charlie Brewer.

The “art” is a copy of a 2015 sports page with a headline declaring “Charlie’s in charge.” Pasted over the picture of the then-junior quarterback is a simple message: “Not in this office!”

As the coach and his protégé prepare to take the field together for the final time at Lake Travis, a look at their relationship offers a glimpse into the quarterback’s success. Thursday Brewer, who’s in the midst of one of the most efficient seasons in Texas high school history -- completing 77.7 percent of his passes with 52 touchdowns and a single interception -- earned Associated Press 6A offensive player of the year honors.

The road to the award began following a junior season in which Brewer earned first-team all-state honors while leading the Cavaliers to their first 6A championship game appearance by throwing for 3,426 yards with 42 touchdowns and just five interceptions while completing 68 percent of his passes.

“We had some area of concerns this year that I wanted to focus on to make him better and he’s gotten better at those,” Wall said before Brewer delivered a five-touchdown, no-interception, 270-yard performance against Atascocita.

The man behind the headset

In meeting rooms and on the field, Wall’s as demanding as coaches come. But, as both Carter and Brewer quickly point out, Wall knows how to keep things light, and fun.

Wall believes keeping things light and fun helps Brewer, and the rest of the Cavaliers, stay relaxed even when preparing for the biggest games.

“It’s a way to break things up,” Wall said. “No one can sit here and watch film for 45 minutes without taking a quick break. Then, of course, I might throw a peanut butter and jelly at him.”

“It takes the stress off everybody so it’s not all non-stop football, 24-7,” Brewer said. “We have the balance of just stepping back, breathing a bit.”

More than any other sport, football coaches talk about the family feel, the bond between teammates and even coaches as keys to success. Carter and Wall are no exception, and the culture they’ve continued to cultivate at Lake Travis stresses family and togetherness. During the season, position groups often eat dinner together, and players receive frequent invites to visit coaches at their homes. During the playoffs, the entire team eats at a players’ home once a week. That tradition existed before Wall returned to Lake Travis in 2014 – he had been on the staff under Chad Morris previously -- and Wall quickly embraced it.

“You have to earn the respect of the kids, and you do that by knowing your stuff so they see the value in the things you’re implementing, but also you show them you’re a human being in meeting rooms and whenever you invite them over to your house for dinner or things like that,” Wall said. “[Charlie and I have] known each other for basically his whole high school career and that’s time to build a great relationship. He knows me, he knows my kids, he knows my wife. He’s been to my house multiple times and it’s not just him.”

Quiet in the locker room, Brewer’s at home, well, at home.

“He was over at our house one day last Spring and I literally had to run over to the school to let somebody in the turf room or something,” Wall said. “Charlie ended up staying there, and my wife said, ‘wow, he’s so talkative when you’re not around. He gets quiet and reserved when you’re around, but he opened up to me and was talking about random things about the house.’”

The quarterback-coach relationship falls somewhere between boss and parent, centered on a healthy respect that each wants to do the best they can for the other.

“He knows I’m not his friend, per se, but we have a great time together,” Wall said. “He asked me the other day if I’m going to miss him next year. I sure am. I know he feels that too even if he doesn’t wear his emotions on his sleeve. We have a great respect for each other.”

“Coach Wall has helped me get bigger, stronger in the weight room, smarter in the film room and better on the football field, better with my progressions, throwing the ball, when to run,” the quarterback said.

The success Brewer’s enjoying in 2016 is the culmination of work that began in 2014, when Wall took over as offensive coordinator following David Collins’ departure to Longview Pine Tree. The partnership blossomed when Brewer assumed the team’s starting quarterback role in 2015.

“We needed to get a lot better and we both went from there,” Brewer said. “We spent a lot of time together in the weight room, throwing the ball. He spent time watching us throw the ball in the turf room, coaching us up.”

And when Wall doesn’t see exactly what he wants, the former Tulsa quarterback doesn’t mind inserting himself into the play to demonstrate.

“He can still throw it really well,” Brewer said. “Every chance he gets, he’s going to jump in there and show off.”

Brewer’s never been overly vocal, in the meeting room or on the field. Wall noticed that early and had to make sure Brewer’s silence didn’t mean he didn’t understand Wall’s teachings.

“Sometimes I have to pull some words out of him in the film room,” Wall said. “You look at him and ask, ‘Charlie, do you understand it?’ and you look at him and he kind of nods his head. In the early days, I had to ask him again, ‘no, do you really get it?’ But he goes out there on Friday nights and he just gets it, or in practice, it just clicks.”

Football is part of Brewer’s DNA: his family tree includes four generations of quarterbacks, including older brother Michael, who led Lake Travis to a pair of state championships.

“I’ve told people before, Charlie just gets football,” Wall said. “He doesn’t always have to tell me. Of course, I quiz him all the time.”

The SMU-bound quarterback usually passes Wall’s quizzes – and those posed by opposing defenses – with flying colors. He’s matured and progressed to the point that the weekly game-plan meetings in Wall’s office are more of a two-way conversation than coach telling player what he wants done.

“I ask him as much as I’m teaching him, asking him what does he like, because I know, if a quarterback doesn’t like a play…if he gives me that ‘I’m not sure about it’ look, that play is out,” Wall said about the process.

Heading into Brewer’s senior season, Wall had three goals for his quarterback, all of which would be key to the Cavaliers taking the one step they couldn’t take last year – winning a state championship.

Wall wanted his quarterback to be more decisive – and effective – as a runner. Last season he gained 583 yards on with his legs but came up short on occasion. Heading into the title game, he’s rushed for 673 yards with nine touchdowns.

“I felt like as a younger kid, he would kind of look for the easy way out and maybe slide for six on third down and eight,” Wall said. “He’s got great ability, but when he takes off running, I wanted him to be a force and then be smart.”

Another thing, often unseen by anyone not wearing a coach’s headset, was Brewer’s execution of a play-action fake – a pass play designed to fool defenses into thinking the quarterback’s given the ball to the running back.

“I wanted him to make his play actions look more real,” Wall said. “I always tell him his play actions need to look exactly like the run. His fakes and things like that, what he probably thought was just a little thing, matter tremendously as far as the concept of the play.”

Perhaps the most telling difference in Brewer’s game has been his improvement on long throws down the center of the field.

“In looking back at last year, I thought that was a major area of concern,” Wall said. “We would have guys open, but we weren’t throwing it on time. It just wasn’t good.”

Extra attention to those long throws have paid off. His connections with Maleek Barkley for an 80-yard score against Hendrickson and Cade Green for a 58-yard score against Westlake in the regional championship game are just two examples Wall points to as evidence that Brewer’s fixed that aspect as well.

“He’s throwing the deep post right where it needs to be,” Wall said. “I could see a noticeable improvement in his game. I felt coming into this year, his deep post was one of the worst things he did. He was just throwing it in the wrong place or late. Now, when we see it work, there’s no error in his game.”

From his spot on the sidelines during games, Carter has seen Brewer take a complete grasp of the offense.

“From listening to what’s happening during an offensive play, Charlie is thinking like Coach Wall is thinking when he looks at a defense,” Carter said. “When I hear [Coach Wall] say, based on a look, that a certain receiver should get the ball, that’s where the ball’s going.

“Playing quarterback is so hard, especially when you’re in a passing offense,” Carter continued. “It takes time to understand the nuances: when we want the ball to go where, when to take a chance and when not to. It comes from experience and maturity, and man, Charlie has played incredible.”

Wall hopes his quarterback has one more virtuoso performance in him as the Cavaliers head to AT&T Stadium to battle a 15-0 team from The Woodlands. Brewer and Wall have had their last film session in preparation for a talented, and just 48 minutes of football remain before Brewer heads back to Dallas in January, where he’ll enroll early at SMU to begin his college career.

Wall’s not looking forward to the emotions he’ll feel after the game.

“I’ll miss that token ‘what’s up?’” he said. “That’s what he says any time he sees me, greets me, whatever. He’s been my boy for a couple of years now. I really hope that he goes out on top.”