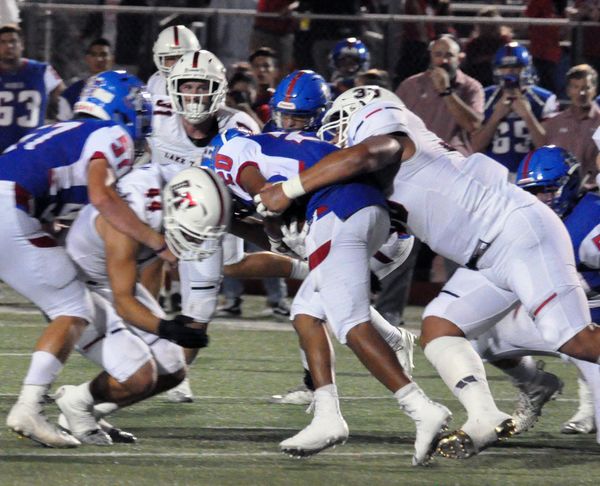 Perhaps more-so than in recent years, it’s difficult to discern differences between two of the area’s top teams as they head into their annual grudge match.

Both Westlake and Lake Travis enter the 11th Battle of the Lakes ranked in the AP 6A Top 10, feature quarterbacks committed to Division I schools and game-changing athletes all over the field. Both played in, and lost, 6A state championship games in 2015 and both have suffered just one defeat thus far in 2016.

Head coaches Hank Carter and Todd Dodge spent time this week complimenting each other’s teams. Dodge compared the Cavaliers to the dominating Southlake Carroll teams he coached a decade ago.

“Lake Travis has had an outstanding program for quite some time, but you don’t always put out double-digit Division I players,” he said. “That’s how we were at Southlake. This group is very, very talented especially with the skill positions. I mean, you’ve got almost the entire starting lineup that has committed to a Division I school. They are very, very talented.”

“They are a much different team when he’s in there,” Carter said of Ehlinger, last year’s 6A Player of the Year. “It doesn’t take a football genius to figure that out. He’s a dynamic player. I feel like their defense doesn’t get enough credit.”

When they talk about keys to games, more often than not coaches start in the trenches. If an offensive line controls the defense, the sky’s the limit for the offensive game plan. If the defensive front gets the upper hand and can disrupt that plan, even the most talented quarterbacks have trouble throwing while running for their lives.

“Regardless of how the rest of the team plays, if your big guys on both sides of the ball play well and outplay the opponent, you’re going to have a really, really good chance to win the football game,” Carter said.

Exhibits A and B can be the last two games between the teams. In 24-7 and 35-14 wins, Lake Travis’ defensive front has sacked Ehlinger 13 times, including a whopping 11 in 2014. Under pressure in 2015, he completed just 18 of 37 passes, one of the few times he’s completed less than half of his passes in a game in three years as the starter.

“We’ve got some depth and versatility in that group,” he said. “It’s one of the more athletic lines we’ve had. I’ve been pleased with their performance, and we’ve got to go out and do it again.”

If Lake Travis has struggled in one area in 2016, it’s been the defensive line. Aside from defensive tackle Sammy Ochoa, the Cavaliers entered the year with three starters who hadn’t started before, two moving up directly from the junior varsity.

Defensive end T.J. Simien, a special teams’ standout in 2015, has emerged as a dominating defensive end, but when Ochoa missed several games with leg issues, the line got even more inexperienced, and undersized. Kade Langston, Kyle Wakefield, Cesar Guzman, Drake David and Reid Bacon are all seeing their first extended varsity action and adjusting to the differences from subvarsity to varsity.

“We had some growing pains early, getting used to the speed of the game,” Bacon said, “but I feel like it’s getting better.”

The Cavaliers have tightened up after allowing 91 points to San Antonio powers Judson and Steele to open the season. In the three games since – albeit against lesser competition than the two 2015 6A semifinalists – the Cavaliers have allowed just 31 points. Carter hopes the improvement continues to show against the explosive Chaps.

Lake Travis’ defensive leaders understand the task ahead of them. In his return to action against Hays, Ehlinger connected with Andrew Boykin for four touchdown passes in the first quarter, hinting that he’ll be ready to roll when the Chaps take the field against the Cavaliers.

“[We’ve got to] try to contain Sam, take away all the in-cut routes, which is a big strength of theirs, stop their big running back, especially early,” said Lake Travis safety Austin Hiller. “Don’t let them get the momentum.”

Containing Ehlinger hasn’t been easy for opponents over time. The quarterback’s shouldered Westlake’s rushing attack, gaining more than 1,300 yards last year. Not this year. Westlake’s leaned on newcomer Nakia Watson to spark the rushing attack. The big back hasn’t disappointed, averaging better than 130 yards per game with 12 touchdowns.

“It gives them more options, definitely, and it makes us have to worry about another person,” said Lake Travis linebacker Mateo Lopez. “Last year it was about containing Sam on the run and with his passing. This year we have to contain Sam with his running and passing, and now this new running back as well.”

How much Ehlinger runs Friday remains to be seen. Dodge removed all of the designed quarterback runs from the playbook against Hays, but the quarterback said he’d be able – and willing – to keep the ball and run this week.

“My knees are completely fine,” Ehlinger, who had surgery four weeks ago, said after beating Hays. “[Against Lake Travis] I’ll be doing the same things I was before.”

Carter said Westlake’s defense hasn’t gotten as much credit as it might deserve, but he’s paying attention, especially after Westlake’s starters allowed just 28 yards in the opening half to Hays.

“Coach [Tony] Salazar [Westlake’s defensive coordinator] has done a really good job with that unit,” Carter said. “The kids play with a lot of confidence. They fly around and they are tough to score on.”

The Cavaliers’ know that Salazar won’t sit back and let Charlie Brewer take his time to pick out a target from all of the college-bound talent Dodge referenced: Cade Brewer (SMU), Cade Green (Wisconsin), Maleek Barkley (Arkansas), Mac Humble (Penn) and Garrett Wilson (offers from SMU and others).

While Sam Duffy and David Neil anchor Westlake’s line, linebacker Levi Jones is the player most likely to come up with big plays. He likes the way his team is playing and hopes to continue that play against the Cavaliers.

“I feel like we’re on fire right now,” Jones said last week. “We need to play with the intensity and execute how we played here [against Hays].”

Both teams enter Friday’s game on four game winning streaks. Only one will make it five.