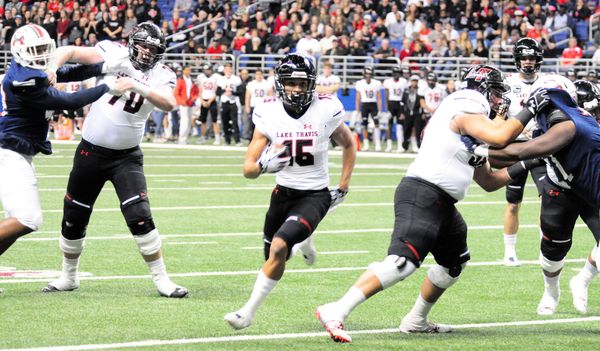 Lake Travis rout of Atascocita is deja vu all over again

Leading up to Saturday’s 6A, Division I semifinal game against Humble Atascocita, Lake Travis coach Hank Carter cautioned that while the 2016 Eagles looked a lot like the team Lake Travis faced in 2013, that didn’t mean the same result was guaranteed.

But it didn’t rule out the possibility either. As it turned out, only the venue (Alamodome instead of Bryan) and Lake Travis’ uniform choice (black pants and helmets as opposed to all white) proved different.

Four years after beating the Eagles 41-16, the Cavaliers used a 63-21 win to advance to Saturday’s state championship game. Charlie Brewer tossed five touchdown passes and ran for a sixth as the Cavaliers scored 56 consecutive points after falling behind 7-0.

“For a while there, we were playing about as well as we could play,” Carter said after the game, “but we made our share of mistakes. I’d like us to be more consistent.”

Lake Travis made a few mistakes – penalties cost Cade Green a pair of punt returns for touchdowns – but none proved costly, thanks to another efficient offensive performance led by the SMU-bound quarterback.

Following the Eagles’ opening drive, Brewer engineered touchdown drives seven of the first eight times Lake Travis got the ball. After he and Maleek Barkley each rushed for touchdowns to push Lake Travis ahead 14-7, Brewer threw five touchdown passes – three to Cade Brewer and one each to Barkley and Garrett Wilson – as the Cavaliers built up a 56-7 lead in the third quarter.

“If our offense will keep scoring, good things are going to happen for the Cavs,” Carter said. “I’m so proud of the way that unit is playing. Coach [Mike] Wall has got them going.”

While the quarterback gets most of the glory, he makes sure plenty of teammates get in on the action. Cade Green caught six passes for a team-high 102 yards, but six different players caught at least four passes as the quarterback completed 27 of 32 for 270 yards. Barkley, Cade Brewer, Wilson, Carson Pepe and Mac Humble each got their chance to make plays.

While the box score will show that Atascocita quarterback Daveon Boyd had a career afternoon, 379 yards and three touchdowns passing, the bulk of the damage came after the Cavaliers had opened up their big lead. After his opening touchdown to Alerick Soularie, he found Lujuan Winningham twice for second-half scores. Boyd passed for 240 yards after halftime.

“Their quarterback was as good as advertised and their receivers were as well,” Carter said. “There were a couple of head-scratchers where we didn’t play things the way we wanted to, but people can throw and catch the ball nowadays and you’re not going to hold people down forever.”