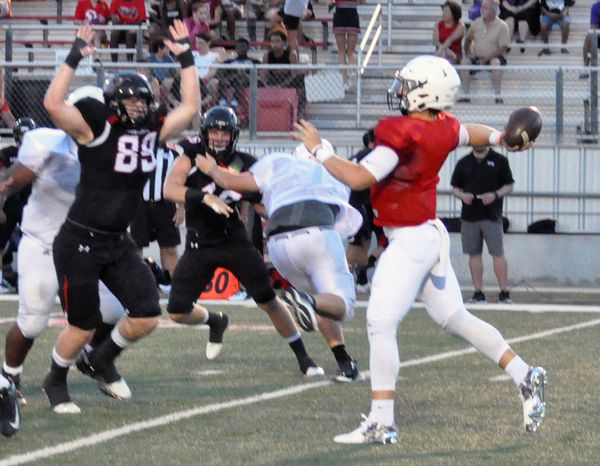 Lake Travis-Judson: What to watch for

Led by Julon Williams, who’s starting for his third year at quarterback, Judson uses an up-tempo spread (who doesn’t these days?) to create mismatches for other dynamic athletes including running backs Jay Miller and Sincere McCormick and receiver Melvin Thompson, all of whom can go the distance when given a little space. For them to get going, though, a virtually new offensive line will have to hit the ground running.

Judson’s offensive line won’t be the only new group on the field. Lake Travis’ defensive front will include some new faces. In fact, none of the four players who started up front in last year’s championship game are back on the line. Sammy Ochoa returns from his car accident to anchor a unit that includes junior DT Kade Langston, junior DE Kyle Wakefield and senior DE T.J. Simien. Expect Cesar Guzman, Drake David and Reid Bacon to rotate in as well. Lake Travis’ front four must put pressure on Williams, but in a way that doesn’t allow the explosive runner an escape to the open field.

“He can hurt us throwing the ball, but he can hurt us worse running the ball,” Lake Travis coach Hank Carter said. “We can’t just go roaring up the field. We need to keep him bottled up, corral him and push the pocket in on him.”

“We’ve got to get used to playing with one another again,” he said.

Scott Cummings and Matthew Herrera are new starters, and Matthew Armendariz starts at a new position. That leaves experienced tackles Brenden Jaimes and Tyler Barrett to set the tone, something Carter is anxious to see.

“We’ve got to play better with our front five,” he said. “Tyler Barrett has to have a big game. He’s a two year returning starter, and we have challenged him to see a big improvement from him this week.”

Lake Travis left last week’s scrimmage against Cedar Park carrying some frustrations to the practice field. A proud, stingy defense allowed two big passing plays, including a deep throw that went for a touchdown. With running backs and receivers that possess breakaway speed, Judson will take its share of deep shots to test the Cavaliers, especially juniors Alec Fuentes and Nathan Parodi, who’ll handle most of the work opposite senior Aaron Brown-Nixon.

“Nathan Parodi is going to have to step up and show that they can’t go mess with him over there,” said senior receiver Cade Green, who’s had first-hand experience with both Parodi and Fuentes’ cover skills. “He’s got to hold his ground and he’s ready for that. He’s really good with his feet, breaking on the ball.”

In a battle of strengths, Lake Travis’ college-bound receiving corps must take advantage of the right match-up against Judson’s athletic defensive backs. The Cavaliers try to dictate coverage by their formation, and the newest starter may find himself in the spotlight the most.

“They’ll give the single receiver a lot of one-on-one looks, and the safety sometimes comes up and bites on run fakes,” Green pointed out. “We have to take advantage of that.”

The Cavaliers often send three receivers – Green, Mac Humble and Cade Brewer – to one side of the ball, leaving a single receiver on the short side of the field. Friday that could be sophomore Garrett Wilson, and his senior teammates aren’t being shy about expecting big things.

“When we talk about those one-on-one matchups, he’s going to be the single receiver and he’s going to have to make some plays,” Green said.

Wilson delivered last week, catching a Hail Mary for a touchdown on the scrimmage’s final play. Though just a sophomore, Wilson’s had his big moments on the Lake Travis varsity stage. As a freshman on the basketball team, Wilson made the buzzer-beating shot to upset McNeil in last year’s playoffs.

Wilson’s a bit of a rarity on this Lake Travis team – an underclassman in a starting role. Senior linebacker Mateo Lopez understands, but stresses that the younger starters need to do their part.

“We’d like to see some the younger guys step up,” he said. “Even though it will be their first games on varsity and they’re going to be very nervous, we’re looking for good effort and for them to do their part so we can do our part around them too.”

Lake Travis had Judson have played just twice, each winning on the other’s home field. The Cavaliers opened the 2012 season with a 47-13 win. The Rockets returned the favor, beating Lake Travis 25-19 to open 2013.