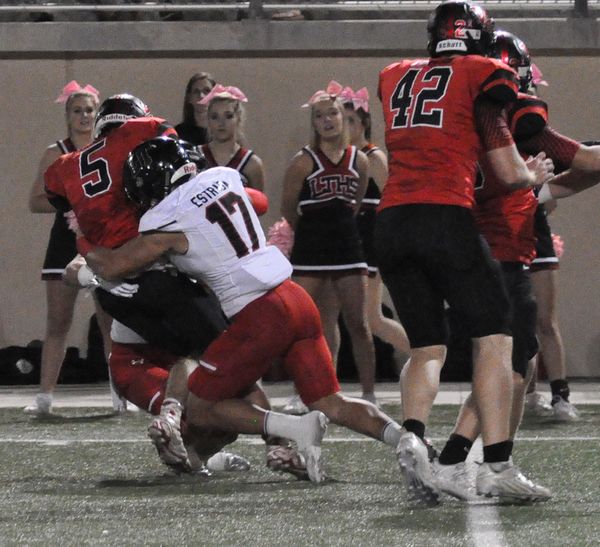 Estrada returns to form after recovering from early season concussion

After a few shaky weeks to open the season, the Lake Travis defense appears to have rounded back into its traditionally stingy self.

The Cavaliers resurgence mirrors that of senior Aidan Estrada, who’s finally regaining the form that saw him make 156 tackles in last season’s run to the state championship game.

Estrada’s senior season got off to a frustrating start. After missing the opener against Judson, he moved from linebacker to Rover and returned to the lineup against Steele. In the week leading up to the game, he developed nosebleeds, and when his helmet slid up while making a play against the Knights, he got kicked in the nose, sparking another bleeding episode.

“When my nose started bleeding, I ran to the sideline, they got it plugged up and I was in on the next play,” Estrada recalled last week.

Based on what Estrada had experienced at school during the week leading up to the game, Lake Travis’ coaches were on the lookout for a recurrence during the game, head coach Hank Carter said.

“We were already on red alert for his nose to bleed,” Carter said. “It had happened the week before in the nurse’s office. He got bumped in the nose [in the game] and I don’t think he thought much of it because of what he’d been dealing with. We didn’t either.”

The Cavaliers’ medical staff got Estrada’s nosebleed stopped and sent him back into the game. He played well, making 10 tackles, including one in the backfield. But it turns out the nosebleed wasn’t the only issue that night. Saturday is a treatment and weight-lifting day for the Cavaliers, and Estrada reported as usual with his teammates. Carter noticed something immediately.

“The thing I remember that Saturday morning was that he looked completely dehydrated,” Carter said. “His face just looked very drawn in. He had played most of the game, and he plays hard. He wasn’t in as good a shape as the other guys because he had missed some much time.”

Dehydration seemed reasonable given how much Estrada had played. He felt it, too.

“The next day I felt really out of it,” he said. “We thought I was just dehydrated so I kept practicing.”

“But after that first practice, I was putting my helmet on and the light, the sound…I told coach it just sounded funny,” he said. “They had me go see the doctor. I did a bunch of tests and they said that I had a concussion.”

‘The injury was weird’

Carter said the focus on the nosebleed and lack of an obvious hit, even in re-watching the game film, masked that symptom.

“The injury was weird,” he said. “We didn’t see it. Most of the time when we have a kid dealing with a concussion, we can go back and see the play. But with him, it was different.”

Estrada missed the next three weeks – wins over Jesuit, Hendrickson and Hays – including practices while he waited for symptoms to subside.

“The waiting was terrible,” Estrada said. “I didn’t show up to a bunch of practices because the doctor didn’t want me around much light or sound. I missed a bunch of school.”

Making up for lost time

Doctors cleared him to resume football activities during the bye week, and now he’s back on the field, working furiously to make up for lost time while he re-learns his new position and convinces himself the next tackle he makes won’t land him on the sidelines.

“I had just started learning an entirely new position when I got hurt,” he said. “When I got back I basically had to start over learning again. I’m trying to learn all that, focus on not hurting myself and focus on getting back in shape. All of that is challenging but I’m working on it.”

If Estrada’s not back to full speed yet, those closest to him haven’t noticed. He’s played in three straight games, getting to the ball and helping disrupt things for opposing offenses.

“I think he’s doing great,” Carter said. “When you look at our team, it’s hard to find a better all-around football player. Athletically, he’s a perfect fit for that position. He’s athletic, strong, quick. He’s a good blitzer. It’s a great spot for him. He’s probably still a little bit gun-shy, but I haven’t seen any evidence of it. He’s flying around.”

He returned to the line-up at his new position on Oct. 7 and made nine tackles against Westlake before the starters left the game leading 49-0. Like the rest of the starters, he played sparingly in wins over Lehman, Leander and Vista Ridge. Estrada continues to learn the intricacies of his new spot, but one thing he’s got down is the importance of staying healthy. He’s still convincing himself to throw his body into the next tackle, and it’s hard to blame him after the early-season concussion.

“I’m also distracted because I also think that ‘I know I have to do this, but how am I going to do that without hurting myself?’” he said. “There are a lot of things that can go wrong with that. You only get one head, so you’ve got to take care of it.”

Lake Travis linebacker Aidan Estrada returns to form after getting past an early-season concussion.