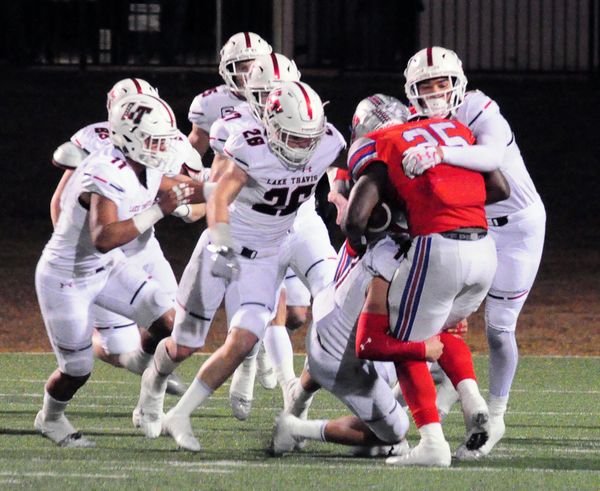 Lake Travis coach Hank Carter would never consciously look past one opponent to another, especially during the playoffs. But he can’t help what his mind does when he’s sleeping.

“I don’t know if I dreamed it or what, but a couple of weeks ago in the middle of the night I wrote it down that we need to work on goal line and short yardage [defense] for Westlake,” Carter said following his team’s 51-3 win over the Chaps.

“They are such a good team, and we were expecting Sam [Ehlinger] to be playing. So many times we were going to see quarterback power on third and one, fourth and one and it’s hard to stop those guys when they are 200-pounds plus.”

It turns out Carter makes a pretty good study guide. His Cavaliers stuffed Westlake’s Nakia Watson three times on fourth down, all in Cavalier territory, and ended up handing Westlake’s its worst loss ever.

“To stop a back like that, that’s an accomplishment,” Carter said. “I’m proud of that.”

Lake Travis also kept the Chaps out of the end zone for the first time since 2004, when Pflugerville won a bi-district playoff game 31-3, a stretch of 158 games.

“Not having Sam in the game, we knew that Nakia was going to be the powerhorse of the game,” said Lake Travis defensive end T.J. Simien, who made the initial fourth down stop by dropping Watson for a four-yard loss on fourth and two. “The key to stopping them was knowing that he was going up the middle every time.”

Watson left his mark on the Lake Travis defense after rushing for 137 yards on 33 bruising carries.

“Credit to him because he’s a great player,” said Lake Travis’ Aidan Estrada, who made 12 tackles, many against Watson. “I have a lot of respect for him. He played a great game.”

“We did some things and Sammy was very key in that,” Carter said. “We put him in a situation where hopefully he would draw a 1-on-1 [match-up] and I think he won that most of the time.”

Some coaches consider fourth-down stops turnovers, and Lake Travis added to those with three conventional takeaways – Estrada intercepted a second-quarter pass and Michael Mast and Conor Kratsas each recovered fumbles for touchdowns.

Lake Travis had forced just 18 in the previous 13 games – good but hardly overly optimistic -- and Carter said he’d been imploring his defense to get its hands on the football more of late.

“I’ve said ‘get the ball out,’ I’ve said ‘get your hands up’ ten-thousand times in the last couple of weeks,” Carter said. “Eventually, it’s getting through. We are batting balls. I like the way we’re getting our hands up. You get your hand on a tipped ball and you never know where it’s going to end up.”

Mast outraced Westlake punter Ben Burbach after a snap sailed over his head in the second quarter and wrestled the ball away in the end zone to give the Cavaliers a 30-0. Late in the game, Cesar Guzman knocked the ball out of Steele O’Connor’s hands and Krastas fell on it for the final score.