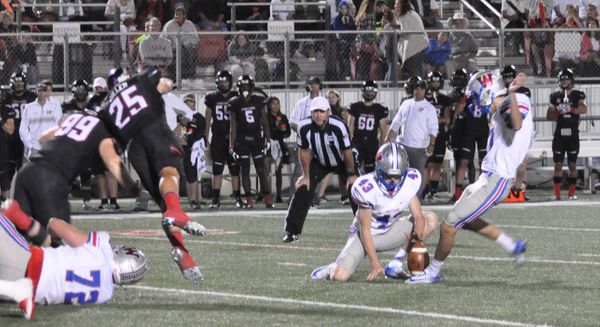 Charlie Brewer threw three touchdown passes and Maleek Barkley rushed for three more, including a 75-yarder on the first play of the second half as the third-ranked Cavaliers won their ninth straight over the Chaps, who entered the game ranked fifth.

“This definitely isn’t what we expected,” said Lake Travis' Mateo Lopez, whose early interception set the tone. “We expected to go out there and do our assignments and do them well, but we didn’t expect it to be this one-sided.”

Westlake entered the game without starting defensive tackles Sam Duffy and Kyle Lindley, and starting running back Nakia Watson also missed the game for an undisclosed reason. To make matters worse, quarterback Sam Ehlinger injured his right thumb early in the game and didn’t return. He didn’t complete a pass in his brief outing.

Things went from bad to worse on the Chaps’ next possession. On third down, Ehlinger tried to scramble away from TJ Simien, Lopez and Aidan Estrada. While being sacked, Ehlinger injured his thumb and never returned.

“After I hit him, I saw that he was hurt,” Simien said. “I was worried because you never want someone to get hurt, but it’s football. I hope he comes back healthy.”

With Ehlinger out, Westlake’s spirit sank, and Lake Travis left no doubt.

Barkley scored on the ensuing drive and Garrett Wilson made a leaping catch of a Charlie Brewer pass for a score, giving Lake Travis a 22-0 lead after the opening quarter.

Taylor Anderson and Steele O’Connor, in for Ehlinger and Watson, tried to keep the Chaps in the game, driving to the Lake Travis 20 before stalling and settling for a field goal try. Austin Hiller blocked the kick and Michael Mast returned the recovery to the Westlake 19. Two plays later, Charlie Brewer hit Cade Brewer to stretch the lead to 29-0.

Westlake’s nightmare continued after halftime. Barkley broke free on the first play of the third quarter for a long touchdown, gaining 75 of his 167 rushing yards on one play.

The Chaps avoided the shutout with O’Connor’s 5-yard run late in the game, extending a streak that dates back to 1978.