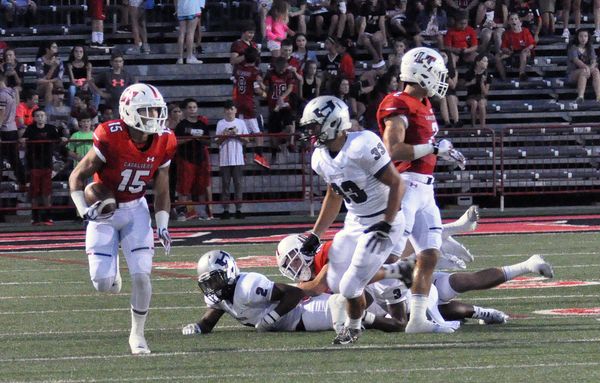 After a sub-standard performance in the season-opener, Lake Travis’ quick-strike, high-scoring offense has re-emerged, thanks in large part to the big play ability of a once-reluctant running back.

Senior Maleek Barkley’s been a threat to defenses since stepping onto Lake Travis’ varsity stage in 2014. Much of his early damage came either in special teams or the passing game, where he spent the first 19 games of his varsity career lining up at receiver.

Barkley began taking snaps consistently at running back midway through last season, when Abe Willows injured his knee and was lost for the season, and became a vital weapon as the Cavaliers ran through the playoffs to reach the state championship game. After carrying the ball just 19 times in 10 regular season games, Barkley rushed 45 times for 497 yards – a gaudy 11 yard-per-carry average – and eight scores before running into the brick wall that was Katy’s defense.

“I’ve been playing receiver for a while and you don’t really get hit as much, but you’ve just got to play a few games and get the rhythm of it,” Barkley said of his transition from receiver to running back.

The transition continues, even after a spring season that saw him play primarily running back, Mr. Outside to Santiago Villegas’ Mr. Inside. But Villegas’ absence, well-documented by the American-Statesman’s Rick Cantu, has left a physical void in the Lake Travis rushing attack, one that Barkley’s striving to fill.

“We just use what we have, run the ball any way we can,” he said. “I’m getting comfortable [running between the tackles]. It’s been more and more games so I’ve gotten more comfortable. I like hitting more now.”

Of course, to hit Barkley, defenses have to find him first. In each of his last three games, he’s had a touchdown of at least 70 yards. He took a short pass 76 yards for a score at Steele, had two carries of at least 70 yards against Dallas Jesuit and caught an 80-yard touchdown pass from Charlie Brewer against Hendrickson. He added an 18-yard touchdown run against the Hawks where he started inside, made a quick cut in the hole, jumped outside and cruised to the end zone down the sideline.

Barkley’s rushed for nearly 300 yards in his last two games, a welcome sight for head coach Hank Carter as the Cavaliers strive to stay balanced. The Cavaliers average nearly 500 yards a game offensively, 200 of it coming on the ground. Barkley said the running game’s resurgence (after gaining just 128 against Steele) has coincided with some bonding between the backs and receivers and the offensive line.

“We’ve been doing a lot of bonding with the line,” Barkley said of a line led by tackles Tyler Barrett and Brenden Jaimes, both of whom have paved the way for long runs. “I have a lot of confidence in our line, no matter which way we run. I feel like if we execute, we can do whatever we want on the field.”

Barkley wants to add one more aspect to his repertoire as running back. He’s known for his ability to make tacklers miss in the open field, where he uses his speed on long touchdown runs.

“When Maleek gets in the secondary, he’s pretty fast,” Carter said. “Our offensive line did a good job [against Jesuit], but Maleek on all of his big runs made one guy miss, and those guys aren’t going to catch him.”

Without Villegas, Barkley realizes the Cavaliers are missing one of their inside runners. The longer he works at running back and takes a few more hits, Barkley wants his chance between the tackles.

“I’m getting comfortable [running between the tackles],” he said. “I can be that guy to hit the hole now.”

He’ll get the chance to test his readiness Friday in Buda as the Cavaliers travel to open District 25-6A play against Hays.

Lake Travis receiver turned running back in action for the Cavaliers