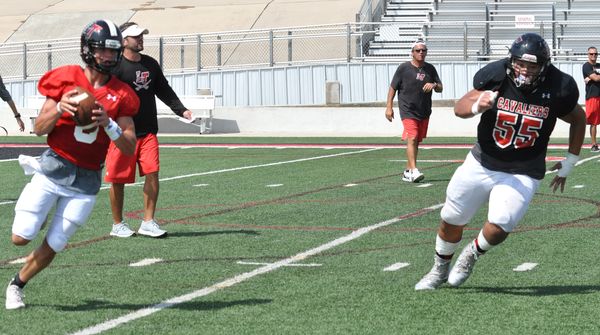 Back at last: Ochoa enjoying two-a-day grind more than most

By the end of the first week of fall practice, most football players have had enough.

After a week of banging heads with teammates on the other side of the ball drill after drill, play after play under the blazing Texas sun, the last thing they want is to spend a Saturday morning doing the same thing again. Even powerhouse programs like Lake Travis can’t escape the early fall fatigue in the first intersquad scrimmage.

“I was really encouraged by the effort,” Lake Travis coach Hank Carter said after his Cavaliers scrimmaged Saturday morning. “Sometimes you don’t get that at the end of the first week.”

The Cavaliers scrimmaged for better than an hour on a scorching Saturday morning, and no player relished that chance more than senior defensive tackle Sammy Ochoa.

“I remember by Tuesday or Wednesday, everybody was aching, sore, complaining,” Ochoa said of the first week of practice. “I went out there with energy.”

If Ochoa brings a different perspective on the grind of two-a-day practices, it’s because he now knows nothing, including football, is guaranteed.

Nine months ago, on a rainy Saturday after helping lead Lake Travis to a 35-14 win over rival Westlake, Ochoa suffered serious injuries when his car collided with another on his way home from a workout. While the Cavaliers were learning about how to stop playoff opponents, Ochoa found himself learning to do life’s simple things all over again.

“The first month was probably the hardest,” Ochoa said after taking the bulk of the first-team defensive snaps Saturday. “I had to learn how to put a sock on my foot again. Getting to the bathroom was a challenge. The first time going up stairs…a challenge.”

The grind, Ochoa said, never got to him. He woke up every day and met the challenge in front of him.

“I love the grind, honestly,” he said. “Hard work is my creed. It’s in my blood. I’ve been raised to work hard my whole life, so when that challenge came across my face, I knew I was going to do it.”

In the hospital following his first surgery, doctors and family members figured Ochoa would need a full year to recover. When he heard, he took that as a challenge, one that he takes great pride in overcoming.

“I beat the timetable for my recovery by a tremendous amount,” he said. “They estimated about a year and I got cleared way before that.”

After watching Ochoa go through the scrimmage, Carter admitted being surprised by the progress Ochoa has made since gaining full clearance to resume football activities in late July.

“I really don’t know what I expected, but Sammy’s blown those expectations away,” Carter said. “He’s always worked hard, but I’m very impressed with how hard he has worked to make it back.”

It will take Ochoa, who carries about 285 pounds on his 6-foot-3 frame, some time until he can get back to the shape he was in before the accident. “It’s a matter of getting the rust off my body,” he said. “I haven’t played football in nine months.”

Carter doesn’t doubt that Ochoa will return better than ever.

“I’m looking for Sammy to have an exciting year,” Carter said. “I think he will be the same ferocious, physical, dominating player that he’s been in the past.”

The coach and the player know there’s work to do. Ochoa still needs to get back into playing shape – no easy task for a big man tasked with chasing a series of mobile quarterbacks. Then again, that’s just another challenge to meet, and he can’t wait to wake up early tomorrow to take the next step.

“I really appreciate waking up at five in the morning, putting on the pads, going out there,” he said. “I love it. It’s what I do.”