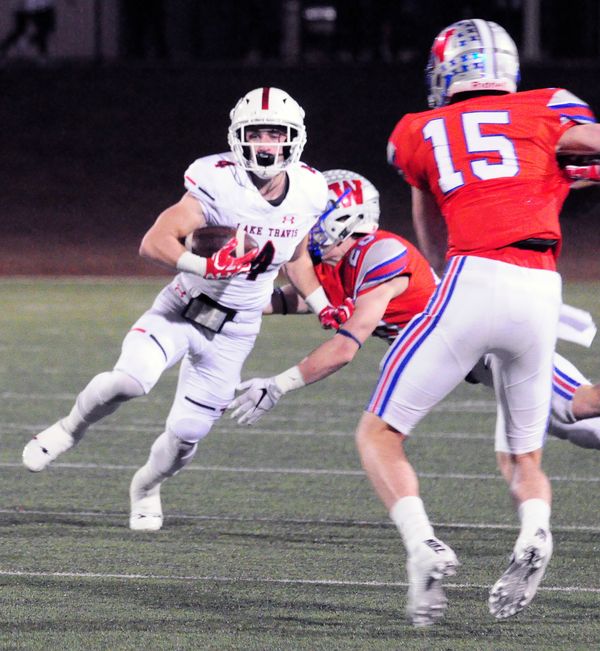 After biding time, Pepe making his mark in playoffs

For the better part of two varsity seasons, Lake Travis senior receiver Carson Pepe has toiled behind the scenes, waiting for an opportunity to get his chance amidst a lineup loaded with college-bound receivers.

“You come in here and there’s already someone who’s a starter in your position,” Pepe said this week. “It’s hard to work your way through.”

Pepe has ‘worked his way through’ and has emerged as yet another weapon on an offense loaded with them. In four playoff games, Pepe has 14 catches – tied with Cade Green for second on the team behind Cade Brewer. He’s one of seven Cavaliers with at least 24 catches this season. Twenty of his 27 grabs have come since Oct. 28.

“The spot that he plays is going to get a high volume of touches in the passing game because of the run-pass option stuff that we do,” Lake Travis coach Hank Carter said of the emerging Pepe. “Plus, we’ve been watching him every week and I’ve seen him make plays.”

Pepe spent all of last season and the first part of this season running with the second team. He saw considerable playing time in convincing wins but he longed to make a bigger impression on games while the outcome remained in doubt. Biding his time wasn’t easy, or fun.

“He has been a great example of persevering,” Carter said. “There were times last year and early this year that he wasn’t happy. He wanted to play more. We knew that.”

Rather than sulk, Pepe kept working to improve. He paid more attention to his blocking assignments. He improved his ability to catch the ball. He sharpened his route-running.

“We say it all the time, but it’s the truth: the boys determine who plays [more than the coaches],” Carter said. “Their actions and the way they play compared to their teammates in games and on the practice field determines who plays. A year ago, there was a gap between him and the other guys. One of the reasons he has burst on the scene is that he’s improved the other parts of his game.”

Pepe may not have the size of Brewer, the leaping ability of Garrett Wilson, the speed of Mac Humble or the hands of Green, but he finds a way to make things happen.

“He’s the football version of [NBA player Matthew] Dellavedova,” Carter said, referring to the undersized, pesky guard who helped Cleveland win the NBA title. “That’s who I would compare him to. He’s gritty, he’s tough, a scrappy guy. It’s not always the prettiest thing, but it’s successful and efficient.”

If the hard work got him into the rotation, his play kept him there. When three starters missed the game at Vista Ridge late in the regular season, Pepe stepped in with two long punt returns and a career-high 89 receiving yards. He’s been in the mix ever since. Now he’s catching four or five passes a game during the most important part of the season.

“Man, he is a handful in space,” Carter said of Pepe’s abilities. “Rarely does the first guy get him down. He’s creative with his running style.”

Quarterback Charlie Brewer’s noticed as well, getting the ball into Pepe’s hands quickly and letting him do the rest.

“It’s fun getting him the ball. It’s a stat-padder for me for sure,” said Brewer, who hasn’t needed help padding his stats (3,303 yards passing, 47 touchdowns, 1 interception, 76.6 percent completion rate). “Whenever you throw a bubble screen and he runs for a bunch of yards a few times a game, it’s really helpful for our offense.”

The duo combined for an early score in Friday’s win over Westlake. Pepe took a quick pass, spun away from a would-be tackler and pin-balled into the end zone.

“Just the way we drew it up,” Brewer said with a smile.

Pepe may not have drawn his football career up this way, nor did he envision his path would take him from football to rugby, but it has. Having played for less than a full year, he’s committed to play rugby at Cal next year.

“I tried out for a game and I really liked it,” he said. “I got some state recognition, then I got on this team and got looks, and one thing led to another.”