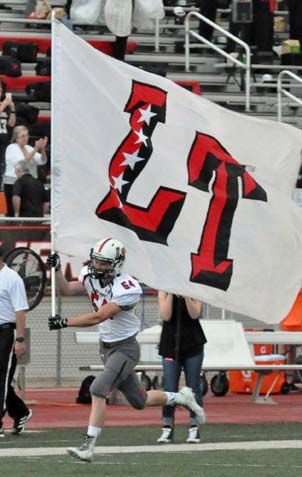 About this time in each of the last few seasons, area high school football pundits wonder if the lack of depth in District 14-6A works against the top teams when the playoffs arrive.

Lake Travis coach Hank Carter has heard the question. Does he worry that his team won’t be battle tested when the playoffs arrive? Most figure, and the standings and early results bare it out, that only Westlake and Bowie are capable of giving the Cavaliers a playoff-caliber test. While Bowie had beaten Westlake in each of the last two seasons, they’ve been anything but a test for Lake Travis. The Cavaliers have won the last two meetings by a combined 107-7.

While he understands, Carter doesn’t buy the argument that a weaker district puts the Cavaliers at playoff disadvantage.

“I don’t think that’s as big a negative as people would think,” Carter said earlier this season. “I know our district doesn’t seem to be world-beaters top to bottom. Do you want to play elite athletes every week? Yeah, you’d like to do that, but I’m going to tell you, too, that beats you up.”

It’s the Cavaliers who are delivering the beatings, and they’re doing it at a pace even Ronda Rousey can appreciate. Against Hays, Del Valle and Lehman, Lake Travis led 49-7, 29-0 and 42-0 at the half. Starters have played in the third quarter just once. To compensate for lost playing time on Fridays, the starters get more work, harder work, in practices.

Carter likens the Cavaliers situation – and in part credits some of their past championship success – to another team that might not play the toughest competition week in and week out but still finds success.

Looking back to 2002, when the NFL realigned to its current four-division format, the Patriots have won or shared the division title every year, and no one has made the claim that they weren’t playoff-ready after dominating a weak AFC East.

The only year New England didn’t make the playoffs was 2002, when three teams finished 9-7 and the Patriots lost the tiebreaker. In the 12 years since, the Patriots have won the division outright, had the best AFC record five times and have been the division’s only playoff representative eight times. Eight times over that stretch, more than half the teams finished with records below .500.

Since leaving the 4A ranks following the 2011 season, Lake Travis has had Patriot-like success in District 15-5A and 14-6A. The Cavaliers have won all 23 district games they’ve played since moving up by an average score of 47-10.

If there’s a silver lining to the perceived cloud of weak district opponents, it can be found in the way the Cavaliers’ schedule sets up. The Cavaliers finish with games against Westlake (Oct. 23), Bowie (Oct. 30) and Akins (Nov. 6) before the playoffs begin the following week. The Chaps and Dawgs will give the Cavaliers a taste of playoff-caliber football late in the regular season. While Akins has improved and likely will be fighting for the final playoff spot, the Cavaliers may find a final opportunity to get a big, early lead and rest starters for the playoff push.

Whether the string of games that has seen Lake Travis’ starters play less than 25 snaps per game helps or hurts, the Cavaliers understand that’s something they just have to work through. As has been the coaching staff’s mantra since they have arrived, their play is about Lake Travis, not so much about who’s on the other sideline.

“I wish we were getting more reps, but it’s one of those things we’re not in control of,” Carter said. “We’re playing the people that we’re scheduled to play, and we have a philosophy about how we do that. We take measures during the week, though, if we feel like the game will be one where our ones won’t get a ton of reps. Our practices are set up in a way to make sure we’re getting the work that we’re needing.”

Anderson enters Friday’s game at Burger Stadium winless in district play. Chances are it will be another short night for Lake Travis’ starters. They might need the rest after another long week of practice.