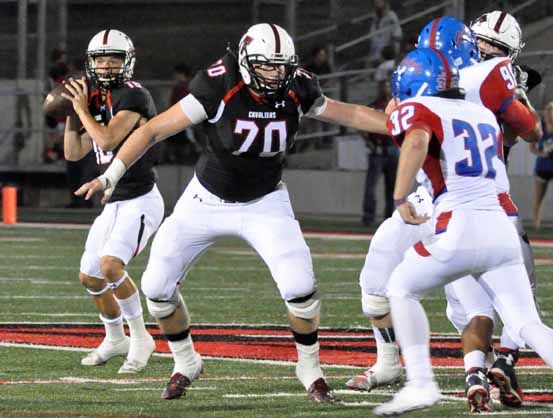 Each Friday night, the key to who will likely win and lose a football game hides very much in plain sight.

While fans focus on the ball and its journey from quarterback to end zone – and Lake Travis fans see that journey quite regularly most Fridays – coaches tend to focus on a five-yard wide window that tells them who has the upper hand: the line of scrimmage.

For the offense, win the line of scrimmage and every play becomes a threat to score. Lake Travis subscribes to that theory – it has for years, really. The Cavaliers’ recent championship teams have been loaded with top tier linemen, most notably Paden Kelley and Taylor Doyle. Kelley and Doyle teamed up to help the Cavaliers win it all in 2008, and between them they also won in 2007 (Kelley), 2009 and 2010 (Doyle).

“I paid a lot of attention to Taylor Doyle,” said Cavalier junior Brendan Jaimes, a starter at offensive tackle and student of Lake Travis football history. “He’s probably one of my favorite idols. I look up to him a lot, the way he played in high school. It was vicious. It was awesome to watch.”

In Jaimes and classmate Tyler Barrett, Lake Travis has the closest thing to matching Kelley and Doyle on the 2008 line: two tall, strong tackles who both protect Charlie Brewer and open holes for Abe Willows and others to run through, often to pay dirt.

“Having the size and length at tackle is an advantage,” head coach Hank Carter said of his tackles, both of whom stand 6-foot-5 and weigh 255. Both are Division I prospects, but Carter said the thing that impresses him most about Barrett and Jaimes – and the entire offensive line – is the ability to work as a group.

“We have intelligent kids who are hard-nosed football players with some physical ability,” Carter said. “Now, you put them together and that group just has to get better working together.”

Barrett and Jaimes understand the head coach’s message. They know that how well they work with guards Jeff Gibbs and Griffin Lemley and centers Koy Spano and Matt Armendariz means everything to the team’s success.

“Our team is definitely a brotherhood,” Jaimes said. “We’re a family and we take care of each other. When someone doesn’t do something right, we correct them and we move on. I think that’s what helps us out a lot.”

It also helps that the line has paved the way for plenty of scoring chances, something Barrett relishes more than knocking a defensive end on his back. Between them Barrett and Jaimes have 10 pancake blocks already.

“Knockdowns are awesome and you like seeing that on film, but I love seeing Abe or Charlie or any of the receivers score because that’s us making an opportunity for them to score,” he said.

Lake Travis figures to get plenty more chances to score. So far the Cavaliers are averaging 51 points per game, on an early pace to top that magical line of 2008 anchored by Doyle and Kelley. So, does that mean that this year’s line measures up?

“I think no,” Jaimes said. “[Doyle’s] got championship rings. We don’t…but we’re looking forward to getting one or two.”

To do that, Carter said, the line must continue to improve its play, both as individual players and as a group that needs to know what each part will do.

“Offensive line play has so much to do with timing, angles and knowing and having a feel for playing next to a guy,” he said. “For the most part we’ve been proud of how that group has performed, but they are young and we need to get better. We just need to keep getting better, keep chopping away.”

While he isn’t quite as familiar with the history, Barrett understands the end goal and what it will take for this offensive line to help the team achieve it. He’s seeing improvement already.

“I know that as a unit we’re playing more together, we’re lifting each other up when someone messes up or falls, correcting each other on the fly,” he said.

But he also knows the improvement can’t stop in week four, week five or even week 12.

“I feel like there is a long road ahead of us and we have a lot of improving to do before we can say we’re going to play for a state championship,” he said. “We have the talent and the opportunity to. We just need to take it and put it to work.”