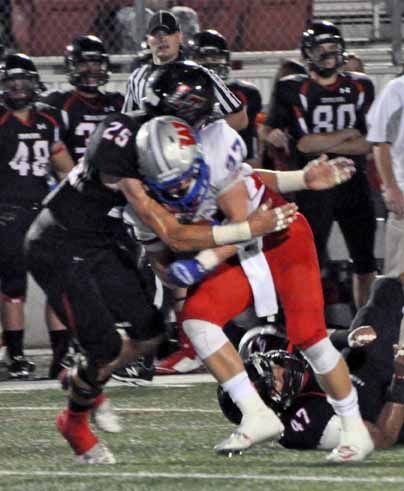 A healthy number of Lake Travis football players, coaches and likely fans as well decided to spend their one free football Friday watching football. Some went because, well, you watch football in the fall, no matter who’s playing.

But Cavaliers made a specific trip east to watch rival Westlake take on Austin High.

“We went over to Westlake and watched the Austin High-Westlake game,” junior tackle Brendan Jaimes said Monday morning. “Just us and a bunch of friends.”

Lake Travis head coach Hank Carter spent the bulk of his game-free weekend watching games as well, this time, though, as a dad and friend.

“Went home, woke up bright and early on Saturday and went to two soccer games,” he said. “On Saturday night I went and watched SMU and TCU play.”

“I went and watched a little football,” he said, though not mentioning the specific destination by name. “Went up the road here.”

The Cavaliers wanted to get an early look at the Chaps, who like themselves are off to a flying start. Lake Travis (3-0, 1-0) ranks eighth, Westlake (4-0, 2-0) ninth in the latest Associated Press 6A state rankings.

Cavalier players and coaches saw about what they expected to see: Westlake showcased University of Texas-bound quarterback Sam Ehlinger and rolled its former arch-rival Austin High 56-12. Ehlinger rushed for 255 yards and five scores as the Chaps outscored the Maroons 28-0 in the second half.

Ehlinger has picked up where he left off during a summer that saw him lead the Chaps to the state 7on7 championship, a run that included an overtime win over the Cavaliers. He’s rushed for 14 scores and thrown for another nine. He’s yet to be intercepted. Westlake’s averaging 44 points per game and climbing after putting up 73 against Anderson and 56 against Austin High.

If the Cavaliers picked up anything more than the Chaps’ willingness to let Sam be Sam from watching the Chaps that they can use in a month, they didn’t say. They maintain they aren’t focused solely on the upcoming Oct. 23 meeting.

“We’re just going to take it week by week and focus on Del Valle this week,” Jaimes said. “Next week we’ll focus on that opponent. When it’s time to focus on Westlake, we’ll do that.”

If things fall into place – Westlake beats Bowie on Oct. 2 to snap a two-game series losing skid – and Lake Travis handles Del Valle, Lehman, Anderson and Austin High, the 2015 Battle of the Lakes will be a battle of unbeatens.

“It’s going to be a fun game, a lot of hype, a lot of tension,” said junior tackle Tyler Barrett. “It should be a really good game.”

Fans must wait a month for that day to arrive. In the meantime, Lake Travis fans can expect two things. First, they can expect the Cavaliers to work on improving each week. It may sound as exciting as watching paint dry, but the Cavaliers understand they are far from the team they hope to become.

“We’re focusing week by week, we just need to constantly improve each week, and when we get to them, we’ll be ready,” Barrett said.

Second, they can expect to see a larger than usual crowd Friday at Del Valle. A key part of that crowd, though, won’t be there to cheer for the Cardinals. Westlake has its bye week Friday. Don’t expect the Chaps to miss the opportunity to check out the Cavaliers.