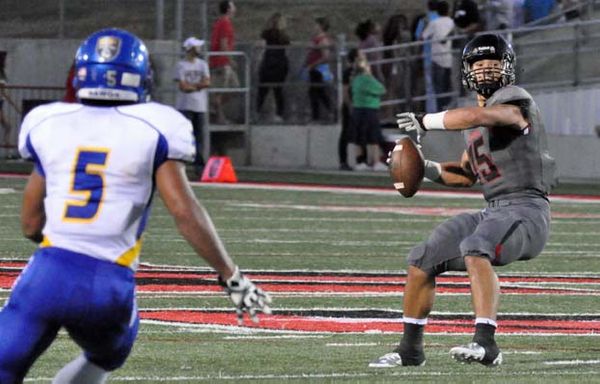 Following Friday’s 60-3 win, a game in which he celebrated his birthday by scoring a touchdown on the opening play, Cade Brewer smiled as his teammates ribbed him about the one that got away.

“They gave me a hard time about it,” the junior tight end said.

“It” was the Cavaliers’ trick-play-du-jour. Early in the opening quarter, leading 7-0, offensive coordinator Mike Wall dialed up one of the handful of trick plays he takes into every game. This one called for Brewer, lined up wide left, to come back to the formation as if to run a reverse – a staple of the Cavaliers’ offense, stop and fire a pass downfield to Cade Green, who feigned a block and got open behind a defense sprinting to the line to stop the run.

The trick play didn’t work, but in a way it did. The Bowie coaches scouting the game in person as well as coaches from Austin High, Westlake, Akins and even potential playoff opponents got a look at something else they’ll have to account for when prepping for the Cavaliers.

“I want defenders to have to defend our entire field and every kid in more ways than one,” Wall said. “I want defensive coordinators when they see is to be like, ‘Holy cow.’ I want us to be very dynamic, and then when you throw in the tricks, that’s just one more element.”

Of course the “Holy Cow” element would come into play more if the tricks worked. Friday’s didn’t, but more often than not, they do. Three of the Cavaliers' six trick plays have gone for touchdowns this season.

And Wall raves about their ability to throw it, despite Brewer’s incompletion Friday. Barkley threw a touchdown pass against Del Valle to Mac Humble. Willows hasn’t hit one yet this year, but he threw a quarterback-worthy pass for a touchdown against Hays last year.

“I tease Charlie all the time that last year I think Abe threw the best pass of anyone when he dropped one in against Hays perfectly,” Wall said. “It was covered and he dropped it right in there to Hudson Fife for a touchdown.”

While fun and a nightmare for opposing coaches to try and plan for, the trick plays serve another purpose, a more vital purpose, for Wall. They get the players into the game plan and even more engaged in film study.

“One of the fun things that I do is put a quiz or trick question in their scouting reports over the weekend, so whenever they read it Monday morning, it’s a way for them to pay attention to the paperwork we [coaches] spend Sundays on,” he explained. “So I’ll put a question in there, a hidden message in there somehow that they have to study. Sometimes I’ll say, ‘The first kid that reads this gets the trick play designed to them this week.’ Last week it was Joey Ceshker.”

In the win over Lehman, the Cavaliers executed their version of the Statue of Liberty and Ceshker used a perfect fake from Charlie Brewer and a block from Jeffrey Gibbs to score against the Lobos.

The payoff for Wall: each week there’s a line out his door of players hoping that week’s trick will have their number on it. Good thing he’s got plenty of pages in that chapter of the playbook.

“I’ve got some good tricks up my sleeve and I’m always trying to learn new ways to do it,” he said.