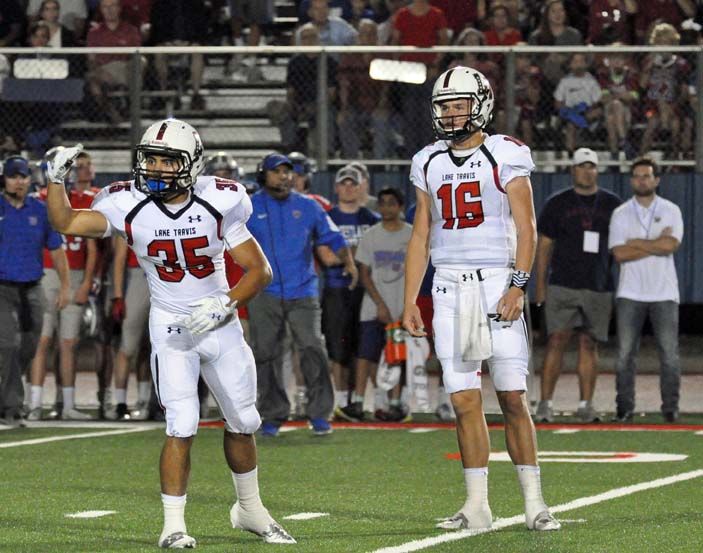 Lake Travis football fans, players and coaches should have enjoyed last weekend. They earned it, after all, with an eighth straight win over rival Westlake.

But despite the big win on the field, the Cavaliers were rocked with news of two devastating injuries. During the game, senior running back Abe Willows injured his left knee and will miss the rest of the season. On Saturday afternoon, junior defensive tackle Sammy Ochoa suffered multiple injuries in an auto accident. While he’ll recover, he’ll likely miss the rest of the season as well.

“We kind of got robbed of our ability to really enjoy and appreciate how great our kids played, what a fun night that was,” head coach Hank Carter said Monday. “Getting in a stressful environment. The game was everything we thought it would be. The kids played fantastic.”

Injuries are a part of football and accidents are a part of life, and so on Monday Carter met with the Cavaliers and began a new week with a new message for the team.

Moving forward, Carter said the coaches will ask more of the experienced players. That will help ease the transition from Willows and Ochoa to Santiago Villegas and Corbin Pierce or Scott Cummings, all of whom have played, just not as extensively as they are about to.

Two of those options stood front and center Friday night, demonstrating the Cavaliers’ depth and talent. Juniors Villegas and Aaron Brown-Nixon stepped up and delivered when starters went down.

“To me, it’s a team win, but there are two heroes tonight though,” Carter said on the field Friday night. “Aaron Brown-Nixon and Santiago Villegas. Those two guys, playing a ton more than they are used to playing, on the biggest stage, in the biggest games of their lives, played awesome.”

Brown-Nixon returned to the lineup when starting cornerback Alec Fuentes sprained his ankle at the end of Wednesday’s practice. He broke up two passes and made a tackle as the defense prevented Westlake’s explosive Sam Ehlinger from making any big plays. Villegas stepped in when Willows injured his knee, leading the Cavaliers with 70 yards rushing on 10 carries and a adding crucial touchdown reception.

“He played incredible,” Carter said of Brown-Nixon. “If I say he played beyond our expectations, it may sound like we didn’t think he’d play well. We thought he would play well and both of our corners [including Tanner Bush] exceeded our expectations.”

“It felt great,” Brown-Nixon said Monday. “I felt like every play mattered. Everything that everybody did was just great altogether.”

Brown-Nixon had started before. Villegas really hadn’t, and while he’s carried the ball nearly as much as Willows on the season, he hadn’t played a quality opponent like Westlake. He said it took him a while to settle in.

“It was kind of different because it was the biggest game we’ve played,” he said. “Once you’ve been through a couple of plays, you forget about everything else and keep playing.”

His third quarter touchdown catch settled him down and reassured everyone that the offense could produce without relying on Willows.

“Whenever I scored, it was at that moment where the offense knew we could still score without Abe Willows and find a way to victory,” he said. “There was a blitz. The pass wasn’t meant to be thrown to me, but once it was thrown I caught it and I just scored. I couldn’t believe it at first. Once it was done, everyone just picked it up mentality-wise.”