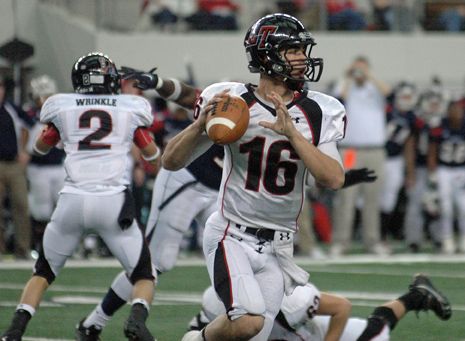 Following a bye week, Lake Travis gets back onto the field by blitzing neighboring Vandegrift 62-7. Senior quarterback Michael Brewer, who injured his shoulder in the second game of the season, returned to the lineup and looked sharp as a tack. He completed 25 of 32 passes for 304 yards and three scores without an interception. Lake Travis wins its fourth straight state title that season.

Following a stressful week and a 33-28 win over Vista Ridge, a more relaxed Lake Travis thumps Lampasas 58-14. Garrett Gilbert and Jason Bird lead the caging of the Badgers, hooking up 10 times for 134 yards and three touchdowns in the win. Gilbert passes for 290 yards and four scores as Lake Travis jumps out to a 28-0 first-quarter lead.

1997 – Throwback through the hands

In the midst of a struggling season, Lake Travis falls behind Burnet and the Bulldogs’ wishbone attack. But behind Greg Wiggins, Paul Pugsley and Matt Lewis, the Cavaliers rally, scoring late to pull within 32-30. Needing a two-point conversion to tie, Cavaliers coach Jim Bob Helduser dips into his bag of tricks. Wiggins tosses the ball to backup quarterback Marcus Franki, who appears to run a sweep to the left. But he pulls up and throws the ball back across the field to Wiggins, who was alone at the goal line. The pass, though, slips through Wiggins’ fingers and a furious rally falls short.

Lake Travis’ last week seven loss came in 2004 in an uncharacteristic defensive struggle against New Braunfels Canyon. The Cougars bottled Lake Travis’ high flying attack and handed the Cavaliers their only district loss of the season. Quarterback Todd Reesing, who’d be named 4A state player of the year that season, took the blame for the loss following a playground-style, scrambling interception that cost the Cavaliers a chance to score on the stroke of halftime. Since that game, Lake Travis has only scored fewer points once (just three against Westwood in 2006), a span of 149 games.