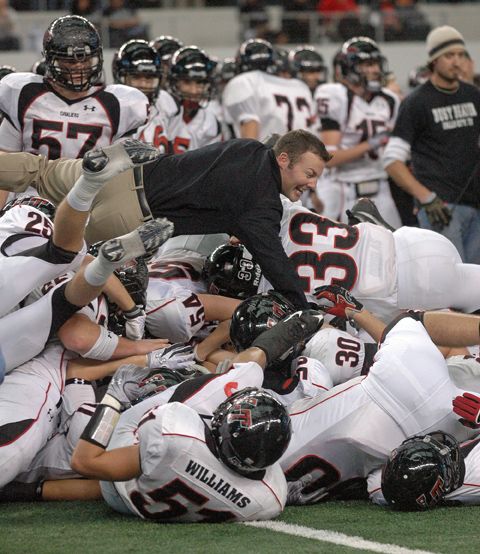 This week in LT Football

Lake Travis tops Waco Midway to wrap up a perfect season and a record fifth consecutive title. Leading 10-0 at the half, Midway returns the second half kickoff for a touchdown. Midway never gets closer against Lake Travis’ suffocating defense, which got interceptions from Luke Hutton and Jacob Standard. Standard also recovered a key fumble, setting up Colin Lagasse’s final touchdown in a 22-7 win. Lagasse holds five fingers aloft following the final score.

Facing a heralded Denton Ryan team featuring state defensive MVP Mario Edwards, the Cavaliers use a series of screens and outside runs to wear the Raiders down. Instead of Ryan’s defense, the Cavaliers dominate with defense, allowing only a third-quarter touchdown. Michael Brewer paces the Cavaliers with a pair of early touchdown runs, including a flip into the end zone for the opening score in a 27-7 win.

In a rematch, Lake Travis gets off to a quick start. Michael Brewer finds Andy Erickson alone behind the defense for a 60-yard score, and the Cavaliers hold off the Lobos 24-17. Trevor Gillette makes a key fumble recovery, but it takes a late conversion from Brewer to Tanner Gillette on fourth down to seal the win.

With first-year head coach Chad Morris calling the shots and Garrett Gilbert putting up yards and touchdowns at record pace, the Cavaliers cruise through the regular season and then through five playoff opponents to get back to the championship game. Against Longview, the Cavaliers jump out to a quick lead that grows as Gilbert finds Cade McCrary, Conner Floyd and Chris Aydam to build a 41-23 lead. With his final pass, Gilbert sets the state’s all-time passing yardage mark and the Cavaliers win their second title, 48-23.

Lake Travis’ first trip to the state championship game is a memorable one. Against storied Highland Park, the Cavaleirs score first and immediately go for two to take an 8-0 lead. The Scots answer but miss their conversion, setting in motion a back-and-forth contest featuring big play after big play. Sean Robinson saves a touchdown by forcing a goal line fumble. Mike DeWitt blocks a field goal, setting up Garrett Gilbert’s bomb into the wind that Cohl Walla catches for a score. Leading 36-34, the Cavaliers hold on when a Highland Park fourth-down pass falls incomplete. The win completes Jeff Dicus’ rebuilding effort, taking the Cavaliers from 0-10 in 2002 to 15-1 in 2007.