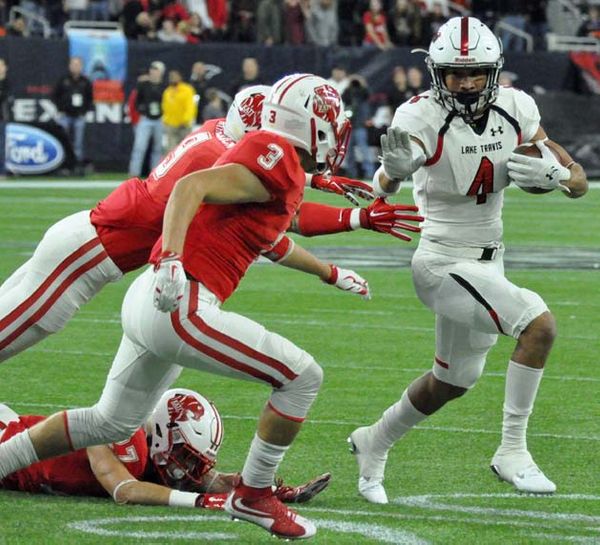 The Good, the Bad and the Ugly

Katy’s defense proved every bit as dominating as advertised. The Tigers forced three Lake Travis turnovers (a fumbled kickoff gave them a fourth) and capitalized on each. The defense proved stout at all three levels. Michael Matus led the Katy defensive line with a sack and a pick-6. JoVanni Stewart and Hunter Stinson dominated as blitzing linebackers (three sacks between them) while Paddy Fisher ate up everything else, including recovering a fumble and returning it to the Lake Travis 5-yard line. The secondary led by Keegan Otte, J.R. Blades and D.C. Blades threw a blanket on the Cavaliers’ receivers that only Cade Green could shake.

Katy didn’t need any help in making things tough on Lake Travis, but the Cavaliers gave it to them anyway. Three first-half turnovers led to all 17 Katy points. Then there were the false start penalties – five in all – that put the Cavaliers behind the chains against a defense that made them pay. After false starts, the Cavaliers fumbled on third and 24 (leading to a Katy score), punted from the Katy 48-yard line, punted from their own 3-yard line and punted after failing on third down from their own 8-yard line. On drives in which the Cavaliers drew false-start flags, they never managed a first down.

Give credit primarily to Katy’s defense, but Lake Travis never found a way to get two vital weapons involved in the offense. Maleek Barkley, who’d averaged more than 100 yards rushing in the playoffs despite playing receiver for the majority of his snaps, ended up losing 12 yards on seven carries. Only one of his carries gained yards on the night. When he caught the ball, Katy stopped him immediately, allowing him only 10 yards on three catches. Barkley’s three catches, though, were three more than Cade Brewer made. Lake Travis’ tight end had been Charlie Brewer’s security blanket, making key third down catches all season long. His only touch of the ball came on a late kickoff return.