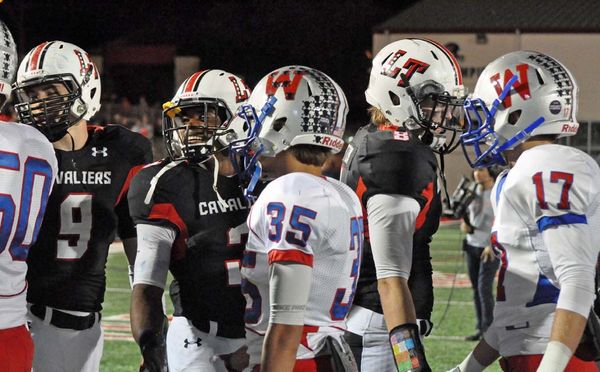 Spare us the 'just another game' speech when it comes to Lake Travis vs. Westlake

As much as players and coaches may try not to admit it, Monday marked the start of a different kind of football week at Lake Travis and Westlake.

Much like an old fashioned boxing card, the preliminary bouts are over and it’s now time for the main event of the season, at least so far. The District 14-6A neighbors and rivals – not to mention undefeated and state-ranked powerhouses – square off in Westlake Friday in the annual Battle of the Lakes, a rivalry born 10 years ago in Darryl Zavodny’s Chick-fil-a in Bee Cave.

Both Westlake’s Todd Dodge and Lake Travis’ Hank Carter know this is the game that two communities – as well as two teams – have been looking forward to since early August.

“I know both schools are really looking forward to playing this game,” Carter said Monday morning. “This is a huge deal to everybody outside the two programs, that’s who it’s really mattering to.”

That’s not to say the game doesn’t hold extra meaning for the combatants. While player and coaches must – and do – say that Friday’s game is nothing more than another game, we realize and respect the fact that they must give us that lip service. It makes the moments of on-the-record honesty that much more genuine.

“Of course it’s our rival so it’s going to be hyped up, the pot’s going to be stirred, some trash talk,” admits Lake Travis junior Sammy Ochoa. “We just have to remain focused and act like it’s any other game.”

But it’s not any other game. Former Lake Travis assistant coach George Oakes took time Monday to visit his old colleagues. The line to buy game tickets stretched out the door to the Cavalier Activity Center, the first time the office has been that busy so early in a game week.

“We hadn’t noticed anything different,” Carter said. “To us, this has been a normal Monday. We go out, we do our routine, we prepare for the next opponent.”

Still, it’s hard to miss the excitement surrounding Friday, something that’s palpable up the road as well. By Tuesday morning all 3,800 of Lake Travis' tickets had been sold. A pair of tickets even popped up for sale on Craigslist – for $100 each on the Westlake side.

“There’s no denying there is a little more electricity in the air for this game,” said Westlake safety Max Mangum. “Everyone’s ready for it. It’s going to be a great week.”

Like the Cavaliers, Mangum – a Westlake captain – insists the Chaps are looking at this like every other Friday game, no matter how much the fans have raised their excitement level.

“The outside world and the world inside our locker room are completely different,” he said. “We’re going to let our fans, and I’m sure they will, talk as much as they want. We’re just going to play our game and do what we do.”

Mangum hopes the Chaps don’t continue to do what they’ve done in the series. Westlake hasn’t beaten Lake Travis on a Friday night since 2007, though the Chaps topped the Cavaliers at the State 7on7 championships this summer, adding a little fuel to Lake Travis’ competitive fire.

“It will be good to get some revenge off of 7on7,” said Cavalier senior Tanner Bush before returning to the corporate line, “but you just have to treat it like any other game, prepare the same way.”

Then again, it’s hard to treat a game you’ve been looking forward to for eight weeks the same as you treat a game against a winless, overmatched district foe.

“It’s been a long time waiting,” Ochoa said, explaining how the Cavaliers have been able to focus on each week’s task at hand while taking an occasional look at Westlake.

“We try not to overlook anyone that we play,” he said.” Whoever the next opponent is, we try to focus on who we’re playing that week. But in the meantime, we do look ahead just a little bit. We don’t get over our heads.”

The fact of the matter is that the Cavaliers have been looking forward to Friday’s game since practice began. With all due respect to Lehman, Anderson, Del Valle and Austin High, they just don’t move Lake Travis’ needle like Westlake.

“At the start of the season, obviously you circle Westlake and Bowie as probably the two games that are the biggest for our district championship run, but we’ve handled business seven years in a row,” Bush said. “It’s not just another game, but you’ve got to prepare like it is because we’ve done it so many times in a row.”

Yes, there’s an extra edge to the way the Chaps and Cavaliers are preparing for Friday night, but the players understand there is truth buried deep within the coach’s premise that this remains just one game – albeit and exciting one -- in what could be a much longer season.

“Westlake is just another obstacle in our ultimate goal of winning a state championship,” said junior safety Austin Hiller.

Bragging rights aside – and Westlake desperately wants to gain some by scratching the seven-year series itch – both teams have bigger aspirations, a message Carter has delivered to his team time and again.

“The thing I’ve communicated with the kids and our message has been that this is a big game because it’s the one we’re playing this week, but we’re going to play bigger games down the road,” he said. “It’s fun to play such a great opponent, worthy adversary. It makes the challenge more fun. But at the same time, there are more games after this one.”