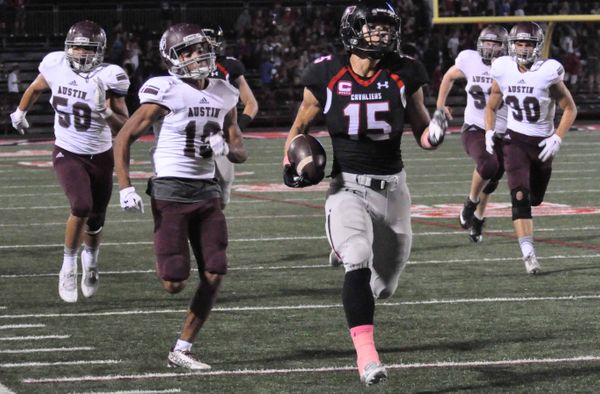 Maleek Barkley returned the opening kickoff for a 97-yard touchdown and Lake Travis (7-0, 5-0) cruised past Austin High (4-3, 2-3) 70-0 in its final game before next Friday’s showdown at Westlake.

Barkley fielded the opening kickoff, made a cut up the middle and ran untouched for the touchdown.

“I saw daylight and hit it,” Barkley said. “We wanted to set the tempo right from the start.”

The Cavaliers also got touchdown runs from Cade Green and Santiago Villegas. Michael Mast added a special teams touchdown when he returned a fumble for a score when the Maroons mishandled a kickoff.

“We were a little out of sync with our passing game early,” Cavaliers coach Hank Carter said, “and Charlie got knocked around a little bit. We’ve got some things to fix but I can’t complain about the performance.”

“We wanted to get ourselves set up for next week,” Barkley said, referring to the showdown with the Chaps. “We’re going into that game full speed.”

Both Lake Travis (sixth) and Westlake (eighth) are ranked in the state polls and will enter the game undefeated.