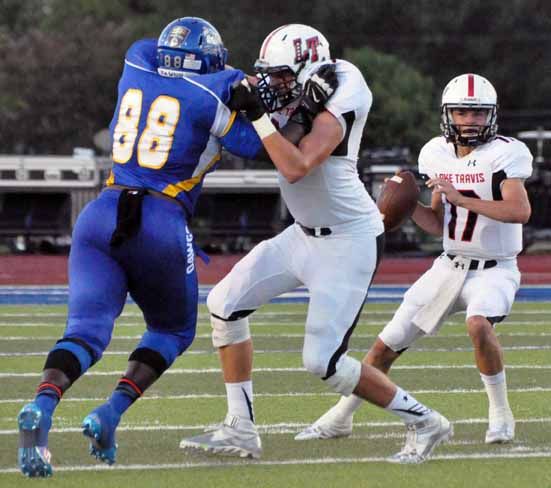 Copperas Cove has a rich tradition of fielding very successful, very talented teams that college coaches enjoy recruiting. In the last three seasons, Cove has sent 18 (2012), eight (2013) and 15 (2014) players on to college teams. On the flip side, though, that’s a lot of talent for head coach Jack Welch and his staff to replace. Last year’s team sent three players to major college programs: Manny Harris to UTSA, Jaylon Waters to Minnesota and Tyrell Thompson to Houston. In all, Cove must replace 14 starters, including dynamic quarterback Harris to compete for a playoff spot out of District 12-6A.

Since posting a 5-5 mark and missing the playoffs in 1997, the Bulldawgs have been an annual playoff participant. Under Welch’s leadership, Cove has made the playoffs every year but once, in 2003 when a 6-4 mark left the team on the outside looking in. In the five years that followed that lone missed playoff season, Cove went 50-11 and reached the state semifinals three times. Welch took the Copperas Cove head job in 1994 and has had just one losing season – his second season – in his tenure.

Cove opened the 2015 season with a 51-14 loss at A&M Consolidated. The Tigers blistered a young Cove defense for 618 yards of offense, including 354 yards rushing. Tyri Merchant rushed for 233 yards and two scores. Quarterback Mason Hickson threw for 264 yards and three more scores. Cove got 134 yards rushing from Antonio Lealiiee, but the experienced Tigers took advantage of Welch’s young team. “We have an inexperienced team and to get them the level of how Bulldawgs play, you've got to see it,” he told the Copperas Cove Leader-Press. “You can't replicate this in practice or with low-rate teams.”

Lake Travis coach Hank Carter said Cove’s offensive line features a pair of talented linemen. J.P. Urquidez (6-foot-6, 300 pounds) has already committed to play at Baylor. He pairs with Alex Ramirez and they’ll give fits to opposing defensive lines. They’ll try to create angles for quarterback Caine Garner to get out on the edge, where he hopes to make plays. “We have to do a better job on the edge than we did [against Midway],” Carter said. “Their quarterbacks made some plays, and [Cove’s quarterback] is more athletic than both of those guys.”