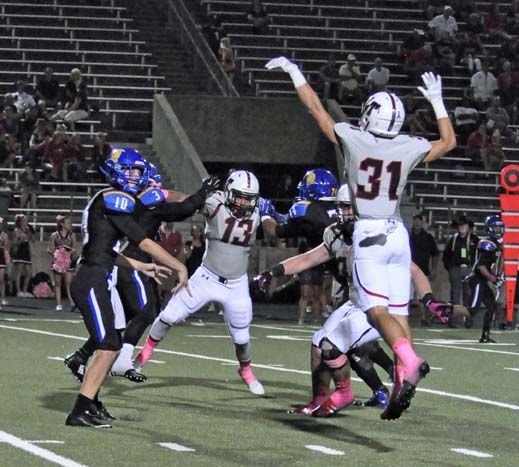 With the main event of Lake Travis’ football season still a week away, Friday’s Homecoming game with Austin High provides the Cavaliers with a final bright-lights tune-up.

The Cavaliers enter the game on an offensive roll, averaging 57 points in four district games. The bulk of that damage has come before halftime. In those four first halves, Lake Travis has scored 41 points per game. That trend figures to continue Friday. In losses to Bowie and Westlake, the Maroons have given up an average of 50 points per game.

Friday’s game should be a solid barometer on how the Lake Travis defense, especially against the pass, has developed throughout the season. Led by senior Beau Kalbacher, the Maroons possess the best passing attack the Cavaliers have seen yet.

“I think our defense is in for a real challenge,” Lake Travis head coach Hank Carter said Tuesday. “We work against a great pass offense in our own every day, but there’s nothing like working against a good one on Friday night. We’ll find out a lot about or secondary and our pass rush. We’ll see where our conditioning is because there’s nothing harder than rushing the passer as many times as we’ll have to Friday.”

Kalbacher has completed 60 percent of his passes for 1,536 yards and 11 scores in six games. When he’s passed for at least 250 yards, the Maroons are a perfect 4-0. Westlake and Bowie both held him below 200 yards and posted convincing wins. Carter sees Kalbacher in the same way he views Hays’ Braeden Kent, who has committed to play at Texas State.

“I don’t see a whole lot of difference between them,” Carter said. “He throws a great ball.”

Kalbacher will work against a Lake Travis secondary that’s settling on its rotation. Senior Tanner Bush starts at one corner, and the combination of sophomores Alec Fuentes and Jake Foster along with the re-emergence of junior Aaron Brown-Nixon gives the Cavaliers plenty of cover pieces along with safeties Robert-Lee Rayos and Austin Hiller, who’s had interceptions in each of the last two games.

In back-to-back wins that followed losses to Westlake and Bowie, Kalbacher has thrown for seven scores against just one interception, averaging 324 yards per game. The Cavaliers know what’s coming and are ready.

“I’m extremely confident in our defense and I’m extremely happy with what we’ve done,” said senior defensive tackle Tevin Paul, who’s bounced back from a knee sprain that cost him two games. “We are where we need to be at this point.”

The Cavaliers’ recent stretch of play makes Paul’s point. Though Anderson became the first team to score on the Cavaliers in three games, the Lake Travis starting defense hasn’t allowed a score since Kent tossed a 69-yard touchdown pass in the opening quarter of the game on Sept. 11.

Paul, Sammy Ochoa and Jayden Hutchings each had a sack against Anderson. The trio has combined for a modest six and a half sacks against teams who didn’t lean on a passing game. They’ll likely get many more chances against the Maroons.

“We will find out a lot about our team this week,” Carter said. “There’s a lot we can get better at and there’s nothing like game experience. This is coming at the right time for us.”