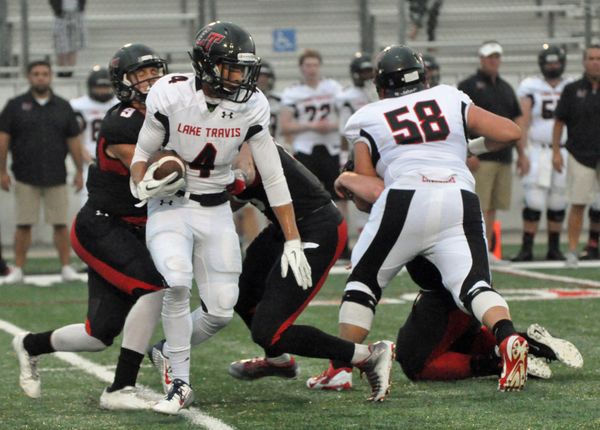 Each season opener brings a sense of nervousness to everyone: fans, coaches and players alike. High school’s nature calls for a crop of new players to step up each year to replace those key players who graduated.

Lake Travis has its share of new faces, but plenty of familiar faces return, including nearly all of the offensive skill players. The wealth of returning players has changed the vibe considerably as kickoff against Waco Midway approaches, when this time last year these returning starters were just underclassmen who’d yet to play on Friday night.

That confidence stems in part from one of the new – sort of – starters. Junior Charlie Brewer takes over as the starter at quarterback. Like Barkley, Brewer started last season’s opener as a starter. His teammates see a different – more confident – player this time around.

“It’s all about the exposure and gaining experience, gaining more confidence in himself,” Barkley said. I think he’s ready.”

“I think Charlie Brewer brings a little different aspect as a quarterback,” Willows said. “He’s has a baller mentality. Him, combined with all the junior wide receivers, they’ve been playing together for years.”

“We’ve got a bunch of returning starters and I feel like everyone’s really comfortable with each other and knows what they are doing,” he said.

All that experience should come in handy on Friday. It has already, head coach Hank Carter said, especially at the quarterback spot.

“The way that he performed gave him a lot of confidence and reassured him that he could play at a high level. He’s another year bigger, stronger, faster and smarter,” Carter said. “I’m so impressed with how he developed throughout the year and especially in spring ball. He had a great summer.”

In three starts last season, Brewer often found classmates Barkley and Cade Green. In those three games, Green and Barkley combined to catch 31 passes for 421 yards and five scores. They both return, and two more juniors – Cade Brewer and Mac Humble – figure to get lots of looks from the quarterback, who understands the bevy of options waiting his passes. He also understands how experience has benefited the entire team.

“We have more experience this year, definitely,” the quarterback said. “There were a lot of starting sophomores last year. [Cade Brewer] is a big target who’s really going to help us, especially in the red zone. Abe, he’s more experienced this year and everyone’s seen what he can do. I think we have a great offensive line. If we can all click on all cylinders it will be exciting.”

Lake Travis produced a few exciting plays in Friday’s scrimmage. Willows hauled in a nicely floated pass from Charlie Brewer for a touchdown and junior Santiago Villegas added two long runs and a touchdown while taking turns at running back. But Friday also showed the Cavaliers are far from a finished product, Carter said.

“We’ve got to get better at everything,” Carter said following the scrimmage. “We’ve got to get ourselves in better shape so we can play a full game. We needed this. We absolutely needed it. There was much more good than bad tonight. We have to play better than that next week.”

Willows, who broke onto the scene with a three-touchdown, 158-yard rushing, 110-yard receiving effort against Midway last year, knows the Cavaliers weren’t at their best in Friday’s scrimmage. But he’s confident that they’ll fix what needs to be fixed for this Friday.