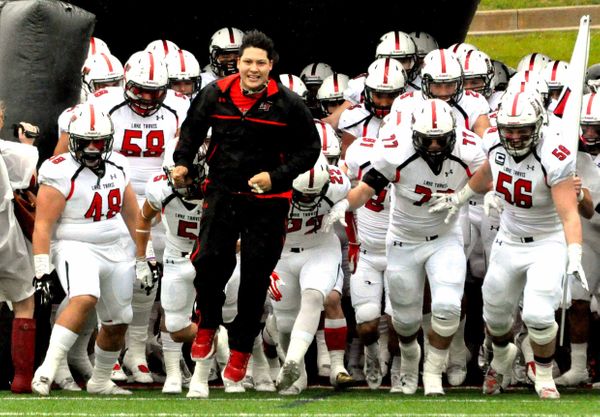 As the clock approaches 8 p.m. Saturday and the Cavalier Band stands ready to play the fight song, two Lake Travis players will send their teammates onto the field with some final encouraging words.

“[It will be] a new chant that we do,” one said Monday. “It really pumps them up. The guys really like it. I can tell from the way they get into it.”

The two players pumping their teammates up would give anything – well, almost anything – to sprint out of the giant inflatable helmet. But injuries robbed Abe Willows and Sammy Ochoa of the chance they’ve waited years for.

“Even though I won’t fully be able to take part in it as we’d like, it would be incredible to get there and finally get it,” Willows said.

So they’ll be there Saturday night cheering – willing – their team toward its first 6A state title.

“Obviously I’d give any finger on my right hand to be out there, but it is what it is,” Willows said resolutely. “I’m ready to watch my team win a state championship.”

Willows entered his senior season as Lake Travis’ top running back and primary offensive weapon and had been well on his way to leading the Cavaliers on the path to Houston. Then, on Oct. 23, while running through and over the Westlake defense, his left knee let him down in the first quarter of what would be a 35-14 win.

Ochoa, the junior who’d exploded on the scene as a sophomore, had battled past nagging injuries and had just begun to assert himself alongside Tevin Paul anchoring the Cavaliers’ defensive line. On Saturday, the day after the win over Westlake, Ochoa suffered multiple injuries in a car crash that sidelined him for the rest of the season.

The injuries, while emotionally devastating, galvanized the Cavaliers. Rather than hang their heads and throw a pity party, the Cavaliers quickly circled up and dedicated the rest of the season to arguably the two best players on the team.

“For the rest of the kids, really it turned into wanting to win it for them,” coach Hank Carter said. “And also when Mrs. [Ginger] Johnson passed [in an auto accident earlier this month]. I heard a lot of the players say that ‘Mrs. Johnson’s up there looking over us so let’s go win it for her.’ I love our kids. They amaze me a lot of ways. They just need to do it one more time.”

As proud as Carter is of the players who will actually play in Saturday’s game, he’s just as proud of Willows and Ochoa for sticking with it, for not letting the injuries cast them aside. That’s been easier said than done.

“There’s an odd sense of detachment, but the boys do their best to make you still feel a part of the team on the sidelines,” Willows said.

Ochoa agreed. Since his injury, he’s become closer to his teammates, in particular with the one whose job it became to fill his void.

“[Corbin Pierce] tells me every game that he’s ‘going to go win it for you’, that ‘we’re going to get the ring for you and Abe,’” Ochoa said. “Me and him have really bonded these past 8 weeks. He was probably the one who came and saw me the most in the hospital and I’m really proud of him that he’s filled in the way he has.”

Willows and Ochoa are thrilled that the Cavaliers have been able to overcome their absences and continue to roll. The offense still averages 50 points per game and the defense gives up a little more than 12.

“The show just goes on,” Willows said. “I’m having fun watching them.”

“It’s almost like I was never there,” Ochoa said. “They can still stop the run, still get after the quarterback.”

Carter, though, won’t let them feel cast aside. They remain, through their presence and encouragement, a vital part of what the Cavaliers represent.

Carter said not playing hit Willows especially hard when the team arrived at Kyle Field for the Region II Championship game against Rockwall. As a senior, his perspective might be different than Ochoa’s.

“My philosophy is that we’re not counting our mishaps, we’re counting our blessings,” Carter said. “I told Abe, ‘yeah, you’re not going to get to play here and a lot of these guys are. You’re a senior and you don’t get to come back and play here next year. But you have a lot of football left to play. I told him for some of these guys, if we don’t win today, that’s the last time they’ll put on a football uniform. Abe knows he’s got more football, more big games ahead of him. With Sammy, he’s going to get to come back and maybe do it all again next year.”

Ochoa’s rehab has gone very well, so well in fact that he said he’d been cleared for regular activity as of Dec. 25. Regardless, he wants to dress for the game.

“This past Friday I actually got cleared to play in two weeks,” Ochoa announced. “It’s not my leg that’s the problem. I still have a few fractures in my arm.”

Carter’s not so sure, though he appreciates the enthusiasm.

“Their attitudes have been awesome and incredible,” the coach said. “Sammy needs to settle down because I don’t even know if he’s cleared to be out there running out with the team and all that.”

While his surgically repaired ACL heals, Willows must continue to be patient.

“I’m on schedule,” he said, smiling at his teammate. “I’m not superhuman like Sammy. I’m right on protocol.”

Willows knows his next carry comes in 2016, at Harvard, where Yale will replace Westlake as a heated rival and the Crimson sets its sights on another Ivy League title. For now, though, he’s accepted his current role. He’ll put on his white Cavalier jersey, the one with the captain’s “C” sewn on the front, for the final time. He’ll watch pregame warm-ups. Finally, he’ll stand with Ochoa before the team inside the giant helmet and deliver one final message as the Cavaliers take the field.

“Just win,” Willows said, trying valiantly not to let his emotions get the better of him. “This is what we’ve been working for.”

“We can’t come this far to lose,” Ochoa said. “How much we’ve been through this year, some teams will never go through that. The fact that we’ve gone through it and made it this far, there’s no reason why we shouldn’t win.”