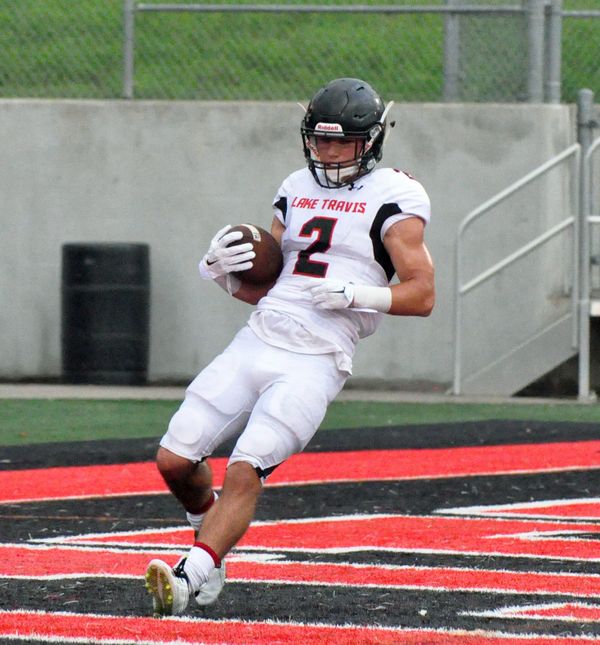 Usually pictured more as a possession receiver – targeted with quick passes that help keep the offense in rhythm – more than a deep threat, Green might just be shedding that reputation. He hauled in another long touchdown pass to ice last Friday’s opener at Waco Midway and is ready to mix it up with the Copperas Cove secondary Friday.

“I think [Copperas Cove] has a good defense,” the junior, who caught five passes for 114 yards including a 77-yard score against Midway in last week’s opener, said. “They’ve got a lot of athletes. I think we’re going to have to play great on offense. I think it’s going to be a great game. I’m looking forward to it.”

For Lake Travis’ receivers, including juniors Maleek Barkley, Mac Humble and Cade Brewer, taking on another athletic secondary represents another challenge that the group collectively must face. Athletic corners, Green said, tend to be more confident and apt to challenge receivers more tightly in what’s called press coverage. Seeing a corner walk up in press coverage definitely gets the receiver’s attention.

“I think most press corners are pretty good,” he said. “I take it as a challenge if they come up and play press coverage on me. You have to take offense to that.”

Lake Travis’ receivers did take offense to that, and after a sluggish first half, overcame the challenges. In the third quarter Barkely beat tight coverage for a 41-yard touchdown, hauling in Charlie Brewer’s pass. Leading 41-24 in the fourth quarter, Green got to the line of scrimmage and saw his corner up in press coverage.

“We had a post route [called] and he came up on me in man press coverage,” Green said. “All I had to do was get off the press and Charlie was going to give me the ball. I did that, and the rest is history.”

With a step on the defender, Green caught the pass in stride and raced 77-yards for the score that finished the Panthers’ night. Big plays tend to do that.

“I think, especially at that point in the game, they were so beat down,” Green said. “A big play like that just kind of puts the nail in them and finishes them off.”

The Cavaliers will look for more big plays Friday in the home opener against Copperas Cove, who struggled to replace a number of starters on both sides of the ball in a 51-14 loss to A&M Consolidated. For his part, Lake Travis coach Hank Carter isn’t letting his team take the Bulldawgs lightly.

“They have plenty of explosive athletes at skill positions,” he said.

That means Green and his fellow receivers won’t find it easy to run away from their coverage. Still, Green knows how important it is to pick up where the offense left off in Waco, clicking and scoring.

“As a receiving corps we have to get in more of a rhythm with Charlie to start out,” he said. “I know Coach [Michael] Wall’s going to call the right plays to get [Charlie] going and we just have to step up and make the plays to get him comfortable.”

And when the quarterback’s comfortable?

“Charlie’s going to put the ball there if you get open,” Green said. “That’s all we have to do.”