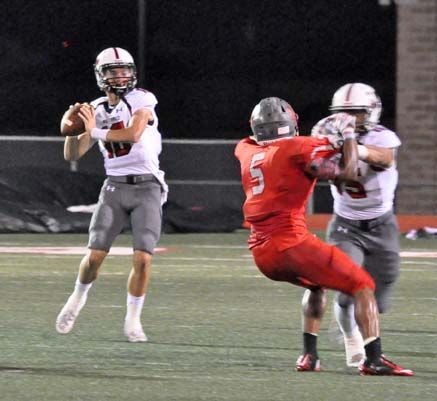 For starters, games take back seat to importance of practice

Fans expect a dominating performance. They’ll likely see it in the form of a convincing win. Cavalier coaches must walk the line of balancing game reps for starters with fairness to an overmatched opponent. They understand that with the style of play and ability to score quickly, that means starters may come out of the game before the bands put on their halftime shows.

“We can’t control the work they might get during a game because we’re not going to embarrass an opponent,” head coach Hank Carter said Monday.

In Lake Travis’ first two district games – convincing wins over Hays and Del Valle – the starting offense scored a combined 100 points before halftime. Against Hays, starting quarterback Charlie Brewer took 21 snaps, leading the offense to 252 yards and five touchdowns. He left with 2:20 remaining in the half. Friday’s win at Del Valle saw a similar story. The starting offense snapped the ball 21 times, gaining 298 yards and scoring six times. Again, Brewer headed to the sidelines before halftime.

“It’s tough,” Brewer said. “I think in the last game I only got to play a quarter and a half. So it’s different.”

By halftime, the starters and backups have switched roles. Carter said that while the starters never like coming out of the game, they do a terrific job cheering on their teammates.

“The backups, they have a role, and when it’s their time to be on the field, the starters’ role is to be there and support them,” he said. “They’ve done a good job of that. I know they were very excited for Rudy [Teshler] the other night.”

The starters enjoy seeing the players who work hard during the week but don't get the chance to play as much during games have their chance.

"It was great to see everybody get in," Carter said.. "A lot of kids got to carry the football, catch the football."

With game reps limited, the starters understand, Brewer said, how important reps at practice have become.

“We just have to do more at practice, things like staying in shape, running after practice,” he said. “When we get to the bigger district games, we’re going to play the full game, so it’s little things in practice to stay in shape.”

Carter agreed, saying the starters are taking more reps, doing more running than he might prefer at practice, but he’s got to get them their work.

“We have to make up those reps in practice,” he said. “We go more good-on-good right now. That’s another way we are being more competitive in practice, more physical. Our conditioning is more. We pick up with that.”

If there’s any worry that the Cavaliers’ quick-hitting passing attack might struggle if it doesn’t get a lot of throwing done on Friday night’s, the group’s efficiency dispels it quickly. Though he doesn’t get to throw much, Brewer’s completing 78 percent of his passes and six of his 18 completions in the last two games have gone for touchdowns.

Still, he said, there’s plenty to work on under Friday’s lights, even if the offense has a limited amount of time to do it.

“From week one to today, I think we’re a whole lot better,” Brewer said. “But, we have a lot of room for improvement on both sides of the ball.”

“We just need to keep polishing up our game,” Carter said. “The thing we keep talking about is that this is ‘work on us’ time as well. Lehman’s going to come out and play hard. They’re a well-coached team. Yes, we’re going to play more talented teams down the road, but we can work on getting better.”