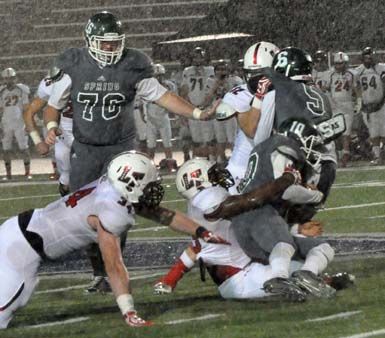 Westfield reached the 6A, Division II semifinals last season before falling to eventual champion Cedar Hill in the semifinals. It’s the same path Lake Travis followed in 2013. Westfield finished last season 12-3, finished second in District 15-6A and won playoff games against College Park 49-21, Hendrickson 24-7, Rockwall 43-38 and neighbor Spring 24-19 before falling 64-33 to the Longhorns. Last season marked the third time in the last four years that the Mustangs have reached the regional final.

Not so easy Ed

Westfield’s led by senior defensive tackle Ed Oliver, one of the top defensive linemen in the country and a University of Houston commit. At 6-foot-2, 285 pounds, Oliver was Dave Campbell Texas Football’s preseason defensive player of the year. He’s the fourth ranked recruit on ESPN’s top 300 for the class of 2016. After 88 tackles as a junior, Oliver’s delivered despite constant attention from multiple blockers each week with 56 tackles including nine for loss and three sacks to go along with 10 quarterback hurries. Just for kicks, Oliver’s also served as a goal-line running back and has three touchdowns on his six carries.

Upping the heat in rivalry

As is often the case with high schools in the same ISD, rivalries run a little tense. Things between Westfield and Spring, the two schools in Spring ISD, got out of hand during this year’s meeting on Oct. 2. With Westfield leading 36-25 midway through the fourth quarter, a bench-clearing brawl broke out, prompting Spring ISD Athletic Director Willie Amendola to declare the game a rare double-forfeit. Later, he said a Spring player who’d been flagged for personal fouls on consecutive plays instigated the fight. In the aftermath, 11 players and both head coaches served suspensions. “Last Friday’s game was disgraceful and unacceptable,” said Spring ISD Superintendent Dr. Rodney Watson in the aftermath.

Oliver is far from a one-man show. Quarterback Dillon Sterling-Cole leads the offense. The senior 4-star ranks as the ninth best pocket passing prospect, according to ESPN, and he’s committed to Arizona State. He’s completed 61 percent of his passes for 2,252 yards and 27 touchdowns against just three interceptions. Daniel Young (668 yards, 8 TDs) and Kenneth Rose (647, 5 TDs) lead the Mustangs’ rushing attack. Tyrie Cleveland is Sterling-Cole’s top target. The 4-star receiver with offers from most of the Big XII and SEC schools has gained 905 yards on 42 catches with 14 touchdowns.