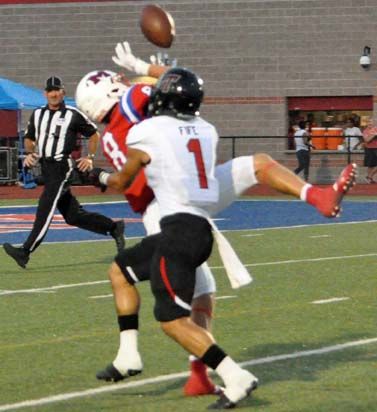 Hudson Fife thought he could walk away from football. Fortunately for Lake Travis, he couldn’t.

Two key special teams plays Friday night solidified the senior’s return after a brief separation from the program. In the second quarter the senior fielded a ball inside his own 10-yard line, made an athletic, crisscrossing, stopping-and-starting return for an apparent 95-yard touchdown only to have the score wiped out by a penalty just prior to reaching the end zone.

“I didn’t know the touchdown didn’t count,” Fife said Monday. “I guess we fumbled on the next play and we were right back out on defense. When I looked at the scoreboard, it looked wrong. I had to ask a safety if I scored and he said it didn’t count.”

Just before halftime, Fife made a saving tackle on a kickoff return, chasing down Cove’s Shamad Lomax just shy of the goal line after a 92-yard return. Those are the plays that get noticed.

“Those were two big plays that resulted in a score for us and kept one away from them,” head coach Hank Carter said Monday.

Fife’s contributions come 11 months after he stepped away from the football program. Last season, as a wide receiver, punt returner and punter, Fife got off to a quick start, catching a team-high seven passes in the opener, scoring touchdowns in weeks two and three and throwing a touchdown pass in week four. Two weeks later, following a fit over playing time and more, he’d left the team.

“I just thought I wasn’t getting treated fairly and I didn’t handle it the right way,” he explained. “I asked one person about it and didn’t get an answer that I wanted and I said some things I shouldn’t have.”

Football hadn’t been Fife’s first love, so he walked away. He was comfortable with his decision, at least at first. The time away – and a conversation with his dad – showed him otherwise.

“I never really thought of myself as a football player,” he said. “I played because I could play the game. My dad and I talked the week before Christmas break. He said it was going to be my senior year and he promised me that I would regret it if I didn’t play with my buddies from freshman year, which was my favorite year. I told him I’d do it, and it has turned out fun.”

Fife met with the coaches, who made sure everyone was on the same page, and rejoined the program. One thing had changed, though. He’d have to crack the lineup at cornerback, where he’d never played before.

“When they asked me to play defense, I said, sure, I’ll try it out,” Fife said. “I still like getting the ball and scoring, but defense isn’t bad. I’ve just got to learn it. I’m still getting used to it. It’s been kind of different because I’ve never, ever played defense before. I’ve always been a quarterback, running back, receiver.”

Carter said Fife’s coming along as a defensive player.

“I think the covering the receiver part has not been a tough transition for him because he’s an exceptional athlete,” Carter said. “Taking on the blocks on the quick screens and the run fits and angles on the sidelines, those are things that he’s working through.”

Fife gets another week of practice to prepare for the Cavaliers’ District 14-6A opener with Hays Friday night. The Rebels feature quarterback Braeden Kent, who’s committed to Texas State.

“He’s an experienced kid committed to Texas State,” Carter said. “So we’ll see what they throw at us.”

While the Rebels may be changing schemes from a power run squad to more of an open spread, Carter will be anxious to see how his team rebounds from what he calls a sub-par effort, despite the 56-13 spread.

“Defensively we’re not playing anywhere near the way we need to,” he said. “We’re just not. We’re not fitting how we’re supposed to fit. We’re not lined up at times. There’s a laundry list of things.”

With non-district games behind them, Hays provides a playoff-caliber opponent that will give the Cavaliers one of their tougher tests over the next two months. In pushing his team to get better, Carter may realize the Cavaliers can win games in September without their best effort, but he won’t settle for anything but Lake Travis’ best.

“We just have to get better,” he said. “We’re not playing to our standard, nowhere near it. The kids know that too.”

Friday’s a chance to begin moving closer to that standard.