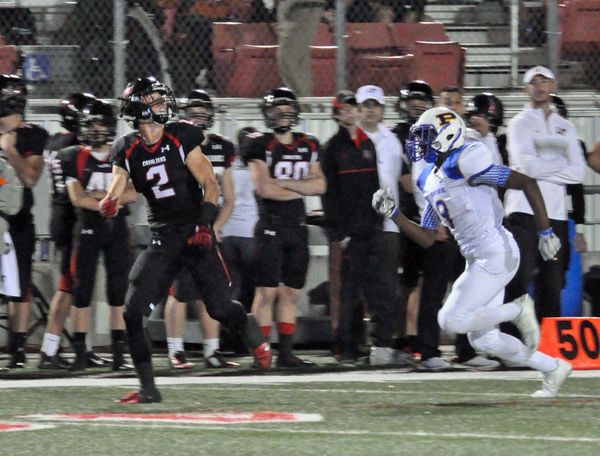 Saturday’s Area championship game in Brenham against eighth-ranked Westfield figures to be one of the toughest tests on what fifth-ranked Lake Travis hopes will be an extended playoff run.

The early test – Westfield and Lake Travis are the two highest ranked teams remaining in either Region I or Region II – is nothing new to the Cavaliers.

In fact, when Lake Travis wins its Area game, it usually plays into mid-December in giant NFL stadiums. In its playoff history, Lake Travis has lost just once (2013 state semifinal) after the Area round, posting a record of 22-1 in the final four playoff rounds.

Westfield joins a list of difficult Area opponents that includes marquee players Johnny Manziell (Kerrville Tivy, 2010) and Malcolm Brown (Cibolo Steele, 2009). The Mavericks also have their own marquee player – several of them, in fact. Defensive lineman Ed Oliver may be the best in the state, and quarterback Dillon Sterling-Cole and receiver Tyrie Cleveland are a dynamic combination as well.

“This is the best football team we’ve played this year in my estimation,” Carter said.

His players understand the challenge at hand, especially the offensive players tasked with finding success against Oliver and the rest of Westfield’s talented defensive line.

“They’ve got a good defense that’s athletic,” said junior tight end Cade Brewer, who’s caught 11 touchdown passes this season. “Their defensive tackle is the number four recruit in 2016 class in the nation. We shouldn’t be worried about that. We should just be going out strong.”

The Cavaliers understand the challenge Westfield poses, but they also understand they pose challenges as well. If its offensive line can give Charlie Brewer time to throw, Lake Travis has a number of weapons that makes defending them a challenge. So far they’ve taken advantage of opposing defenses to average 53 points per game. While Cleveland is Westfield’s primary target – his 45 catches are tops on the team by 13 and Josh LeBlanc is the only other Mustang with more than nine catches – Lake Travis has four players with at least 37 catches.

“There’s not one guy that the defense can lock on,” said Cade Green, who leads the balanced group with 41 catches. “If they double cover, say, Cade [Brewer] one game, well that opens it up for me one on one, Mac [Humble] one on one, Maleek [Barkley] or Hud[son Fife].”

Carter said offensive coordinator Mike Wall strives for the balance, and not just to make sure the receivers are happy with their touches.

“We’ve got a lot of kids that can play,” Carter said. “I think that’s one of the biggest challenges our offense gives people. You’ve got to defend the whole field. You can’t go out there thinking you’re going to take this guy away. We need to be able to get the ball to the soft spot or where the best matchup is.”

Lake Travis understands there won’t be many soft spots against Westfield’s defense and that they’ll need to make time for Brewer to find them.

“We need to pick up our zone game along with the one on ones,” Green said. “They will try and drop back. We just have to find a hole and Charlie will put it there for us.”

When he does, the receivers need to make the plays they’ve been making all season long.

“We have plenty of guys with ability and we just want to keep catching the football,” Carter said. “The catches are going to get tougher and tougher as we play better athletes. Hanging onto the football and converting on third and seven like we did a couple of times the other night are going to be very important.”

In many ways, scheme aside, it’s like the Cavaliers are looking in the mirror. Westfield, off of last year’s semifinal run, expects to be playing in mid-December, just like Lake Travis does.

“They are different than anyone we’ve prepared for,” Carter said. “Extremely talented and they are used to winning. Every time they go on the field, I’m sure they believe they’re going to win. It’s going to be a great challenge for us. It makes for a pretty exciting game.”

“There’s definitely something that drives you inside when you have better competition,” he said. “You know you have to step up your game. You know your teammates are going to step up. It’s great because it brings the team together.”