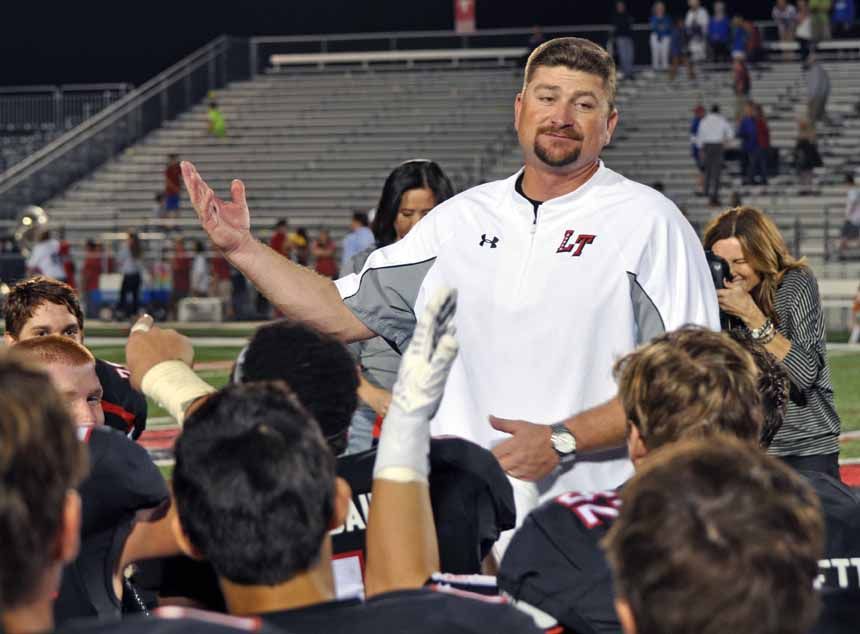 Coaches explain position changes in language Cavs all speak: 'It's like Madden.'

From its picturesque stadium to jumbotron to indoor practice facility inside the Cavalier Activity Center, it’s hard to imagine there’s a tool Lake Travis coaches don’t have at their disposal to make their team better.

All that’s missing might be a Playstation or Xbox. As it turns out, having one might make head coach Hank Carter’s job a little easier.

“I used to play Madden in high school,” he admitted Monday, speaking of John Madden’s still-popular football video game. “Back then it was, what, Madden ’93?”

Each spring, as the varsity coaches rebuild a roster, Carter spends a great deal of time talking with players – usually freshmen who might be getting their first taste of varsity football – about changing positions. To make his point, Carter sometimes goes back to his days as a high school student, when he spent his free time doing some of the same things his players do today, playing Madden.

“They all play video games,” he said.

Carter looks at the player sitting across from him and explains a position change as if he’s talking to a fellow Madden aficionado.

“So all the individual players had these numbers, like their speed was a 92 out of 100,” he said. “That’s what I tell the kids. We want to get the Lake Travis varsity overall score as high as we can. If you’re playing backup H-back and our offense is a 95, that’s great. And let’s say our defense is a 92. If we move you to defensive end and our defense goes up to a 94 and our offense didn’t go down, we’re better.”

“It’s a big deal to a kid when you’re going to ask them to go play a different side of the football and potentially rep way more on that side than the other,” he said. “It always happens with the freshmen. They are freshmen and they get emotional about it, but they trust us.”

And like Ochoa, Gibbs and Paul before them, varsity newcomers Foster, Wakefield and Fuentes may find that moving from desired positions to ones of need may accomplish two goals: to make the team better and get them onto the field faster.

“Most of the kids are motivated by what’s going to get them on the field,” Carter said. “It’s a double-edged sword. We tell the kids all the time that we have to do what’s going to help the team more. That’s not cliché.”

Ochoa and Paul had visions of being varsity running backs, and coaches had Gibbs slated to be the next stud at defensive tackle. But all three moved with great success at the request of the coach. Carter recalled his conversation with Paul, now a 275-pound monster at defensive tackle.

“‘Brother, you’ve been playing running back, and l can look at you right now and tell you are going to be a great player but it’s probably not going to be at running back, and we want you to rep on the defensive line,’” he told his then-freshman. “And he was bothered by that. But at the same time he trusted us and I think it’s worked out okay.”

Carter had a similar message to Ochoa, who burst on the scene last year as a solid linebacker and unblockable defensive tackle next to Paul.

“He didn’t dream of playing defensive end or defensive tackle when he grew up,” Carter said. “But, for me and for us, it’s pretty easy to see that’s a place he can have a lot of success and really help us, not that he couldn’t help us at the others. I mean, try tackling Sammy. That wouldn’t be easy either…”

Foster, Wakefield and Fuentes all focused primarily on offense during their freshman seasons. Foster and Fuentes played receiver while Wakefield played mostly H-back. All three played defense as well, but their passion – like lots of skill players coming up in Lake Travis’ system – lay on offense. But with a solid core of young skill players – the Cavaliers project to have just one senior (running back Abe Willows) see significant playing time as an offensive skill player in 2015 – Carter needed to move some athletes to defense.

Foster has gotten first-team work at cornerback, and Fuentes has run with the first team at strong safety. Another freshman, Ryan Wilkins, has seen first-team work at free safety. Their first-team run may diminish when Hudson Fife (moved from receiver to corner) and Austin Hiller return from baseball, but the experience they are gaining remains a highlight of the spring.

“Those [young] guys have been thrust into the role of playing a lot of No. 1 reps, which is good for them,” Carter said. “They have a lot of ability.”

They, along with the rest of the defense, have been getting a trial-by-fire against what Carter hopes will be one of the state’s best offenses.

“I think it’s pretty awesome that we get to go against our offense during spring, and I think our offense is going to be explosive,” he said. “We certainly have a lot of dynamic players. It’s great training for [the defense], getting an opportunity to make some plays on guys in space that are high level athletes, similar to the ones we’ll see in the playoffs.”

Wakefield’s move from H-back to defensive end has been one of necessity, but it also might accomplish Carter’s Madden-esque goal of raising that overall team score. While Wakefield has played well at H-back so far this spring, the player he’s playing behind has had the best spring of any Cavalier, Carter said.

“H-back is one of those positions where we’ve only got one of those on the field at a time, and the guy in front of [Wakefield] is Cade Brewer and I think he’s had the best spring of anyone so far,” Carter said. “Wakefield has a bright future for us. Where he fits has a lot to do with him but really more to do with what’s around him right now.”

The Cavaliers have another week of spring practice before things wrap up with next Friday’s Jamboree. Over the next week, Carter hopes the Cavaliers continue to develop traits that most dominant teams display: the ability to execute when the other team knows what’s coming.

“It’s those situations where the defense has a little bit of an advantage because the probability is that we’re going to throw it on long-yardage third down or we’re going to run it on short yardage and for us to still be able to execute offensively,” he said. “That’s a trademark of a team that’s really executing well.”

Ready for prime time. Sophomore Charlie Brewer continues to grow into the starting quarterback role, Carter said. After three starts that whet the fan-base’ – and coaching staff’s – appetite, Brewer’s taking the next step. “Charlie is playing great,” Carter said. “I’m impressed by two things. He’s getting the ball out on time and on schedule. He’s not letting the defense get into its pass rush. It seems like he’s got a ton of confidence with his grasp of this offense. He’s a much better athlete and much more explosive than people probably expect of him. I love that.”

Lake Travis’ LeBron. Carter likened Tevin Paul’s spring to that of LeBron James, who recently got raked over the coals for a “mortal” performance in the NBA playoffs. Paul, Carter said, started a little slowly this spring but has been dominant over the last week or so. “He’s so big and so fast that when he’s not making every tackle, people tend to think ‘where’s Tevin?’” Carter said. “With these big guys, it takes a little while to get back into football shape, but after the first couple of days, since then he’s just been dominant. He’s having a good spring.”

Youth movement to defense. Foster, Fuentes and Wilkins aren’t the only young players whose fastest path to the field may be on defense. All of Lake Travis’ primary receivers figure to be juniors in 2015: Cade Green, Cade Brewer, Maleek Barkley and Mac Humble. Carson Pepe didn’t play varsity football last year but is also a junior and figures to work into the mix. “For these young kids, where are you going to go on our offense?” Carter said. “Even after this season, we’ll graduate one skill player – Abe Willows– who’s going to see a whole lot of action. That’s great, but if you’re a young receiver, you have to wonder ‘where am I going to get in there?’”