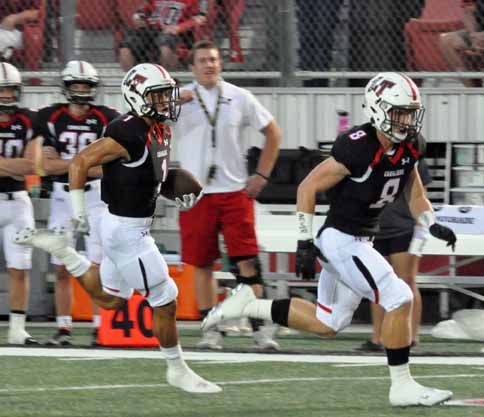 To make matters worse for the Rebels, quarterback Braeden Kent suffered an injured knee while throwing a 69-yard pass for Hays’ only score and is likely lost for the season. Kent is a Texas State commit.

The Cavaliers dominated the game with special teams. Austin Hiller blocked one punt and Hudson Fife and Cade Green each returned punts for touchdowns as the Cavaliers opened up a 49-7 halftime lead. It's the second straight year the Cavaliers have both blocked a punt and returned at least one for a touchdown against the Rebels.

“We work hard at it,” Lake Travis coach Hank Carter said of his special teams. “We want the kids to take pride in it and see that it’s a weapon for us.”

Fife’s 49-yard return gave Lake Travis a 14-0 lead midway through the first quarter, and Green added a 37-yard return later in the opening quarter to push the lead to 28-7.

Cavalier quarterback Charlie Brewer added three touchdown passes – two to Cade Brewer and a third to Green. He completed nine of 11 passes for 153 yards in less than a half of action.

“Hays came in here with nothing to lose,” said Cavalier linebacker Aidan Estrada, who helped key the Cavaliers’ fast start with several big hits. “I think we all executed pretty well and had a pretty good game.”

Lake Travis played without Abe Willows. The area’s leading 6A rusher missed the game with an ankle injury. In his place, Santiago Villegas and Aaron Brown-Nixon combined to rush for 121 yards on 14 carries against the Rebels defense. Each scored a touchdown.