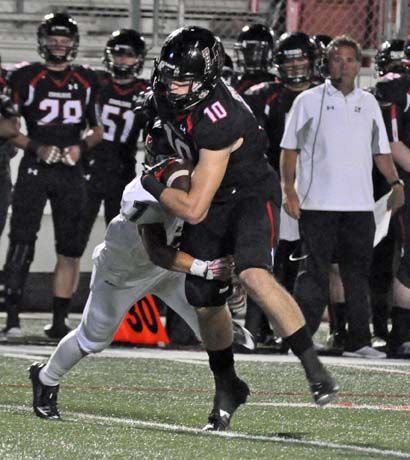 With the playoffs just a week away, most would forgive Lake Travis if it looked past Akins and Friday’s regular season finale.

But the fifth-ranked Cavaliers don’t plan on looking past the Eagles. There’s still plenty at stake as another regular season wraps up.

“We need to win the game,” head coach Hank Carter said Monday, indicating the Cavaliers don’t plan on pulling back on the throttle to rest players for the playoffs. “That goes without saying but it’s our number one goal. We haven’t gone 10-0 in the regular season in a while and the last time we did it turned out to be a pretty good year. We have an opportunity in front of us to go do that, clinch the outright district championship.”

Depending on how things go, Lake Travis’ starters may indeed get some rest. The Cavaliers have run through the District 14-6A slate, winning games by an average score of 54-8. Only Hays, Westlake and Bowie have managed to find the end zone against the Lake Travis defense.

“We need to see a certain amount of work and cover certain material,” Carter said of his troops.

First and foremost will be a refocusing on the defense. After stuffing Bowie in the first half last Thursday, Lake Travis surrendered three second-half scores and allowed Bowie to pass for 321 yards.

“There were some things Bowie did to be successful on certain plays and there were things that Bowie had nothing to do with,” Carter said. “We just weren’t where we were supposed to be.”

Correcting the way his secondary lines up and upping the pressure the defensive front can apply on the quarterback are two of the things on Carter’s checklist for Friday. Another will be playing both halves of the game with the same intensity, something that Lake Travis didn’t do after an admittedly difficult week of preparation.

As much as he loved the way the Cavaliers jumped out, taking a 30-0 lead and leading 30-7 at the half, he feels everyone left their intensity in the locker room.

“We as a staff probably didn’t do a good enough job to make sure they came out with the type of intensity that they needed,” he said. “We just relaxed a little at halftime. We just didn’t do a good job of telling them, ‘okay, great first half, now let’s start over.’ I think we just relaxed a little bit on both sides of the ball, but I’m most disappointed in how we handled that on defense.”

The Cavaliers’ defense, which came up with a trio of turnovers late in the game to seal the win, will likely be looking to clean up its act heading into the playoffs. That’s not good news for an Akins team that’s struggled of late. The Eagles, who have dropped four straight after a 4-1 start, have been shut out twice during their slide.

Kickoff is set for 7:30 at Nelson Field in northeast Austin.