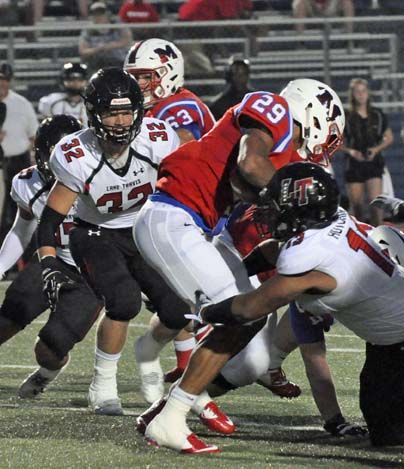 Much to Anderson’s – and the rest of District 14-6A’s -- chagrin, a Lake Travis defense that’s posted back-to-back shutouts may still be getting better.

The Cavaliers blanked Del Valle and Lehman and did so without a heavy contribution from the two players most expected the team to lean on – Tevin Paul and Sammy Ochoa. Paul missed two games with a sprained knee and Ochoa has been limited with a nagging injury. Both played against Lehman, to the delight of their defensive line mates.

“We’ve had a lot of roster changeups and that messed with our chemistry,” said senior defensive end Garrett Womack. “To have everyone set now is a little better. Tevin and Sammy are coming back.”

While the results show the Cavaliers may not have missed their big duo up front, their teammates understand how they impact play, as evidenced Friday against Lehman. Paul and Ochoa overwhelmed Lehman’s offensive line in their limited snaps, combining for 12 tackles and a sack while helping pave the way for Womack and senior end Jayden Hutchings to close in from the outside and make a handful of tackles in the backfield.

“You can tell the difference when they are on the field,” said Hutchings. “With them in the middle, they get a bigger push and the pocket collapses real fast. With them coming back, our defense should be back to the way it’s supposed to be.”

That’s a scary thought for district opponents, who’ve scored just 13 points against Lake Travis. While the competition hasn’t been the best the district offers – though Hays has a 3-1 district mark – head coach Hank Carter likes the way the entire defense is playing, not just the starters.

“The thing I’ve been impressed with this year more than any other year is our depth,” Carter said. “Our backups go in the game and they are executing and doing well.”

Corbin Pierce and Scott Cummings, who’ve manned the middle while Paul and Ochoa have recovered from their ailments, continued their solid play against the Lobos, combining for 10 tackles, and more importantly keeping another opponent off the board.

“I think it’s good what they are doing,” Carter said. “It’s a team game, so when you get a shutout, everybody has done their job.”

Lake Travis last shut out back-to-back opponents in 2008. That year the Cavaliers blanked Hendrickson and Lampasas by identical 57-0 scores. They’ve never shut out three in a row. The 2010 team is the only Cavalier team to post three shutouts in a season. The Cavaliers can match that with another consistent effort against an Anderson team that’s lost all four if its district games.

Are the Cavaliers after another shutout? Sure, but that’s not the ultimate goal of the evening.

“This Friday we just need to work on getting better,” Hutchings said. “The coaches are giving us new things to get better at each week and we try to perfect that by the end of the week and see how we do in the game.”