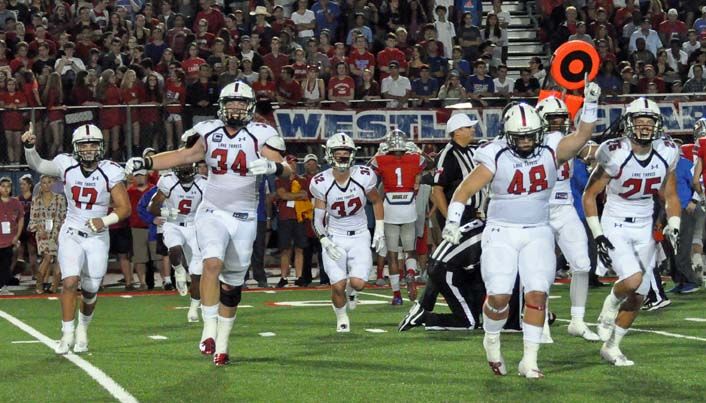 Cavaliers can wrap up 14-6A title with win over Bowie

Bowie stands tied with Westlake for second place in the district standings. The Chaps beat the Bulldawgs 24-9 earlier this month. Lake Travis coach Hank Carter knows his team needs to be ready for a Bowie team looking for an upset.

Talented receiver Josh Wainwright, who ranks first among area 6A receivers with 11 touchdown catches has been Bowie’s main Dawg. Dalynn Threadgill leads Bowie’s rushing attack with 511 yards on 80 carries. The Bulldawgs have overcome some early injuries to clinch a spot in the playoffs along with Lake Travis and Westlake.

Focus shouldn’t be an issue. The Cavaliers hadn’t planned on dwelling over their victory at Westlake, circumstances took most of the joy out of the win.

“We kind of got robbed of our ability to really enjoy and appreciate how great our kids played, what a fun night that was,” Carter said.

During the game, Lake Travis lost standout running back Abe Willows to a knee injury. On Saturday, the Cavaliers learned that standout defense tackle Sammy Ochoa had been injured in an automobile accident and will likely miss the rest of the season.

“They are probably thinking that Lake Travis is reeling coming off a big emotional win over Westlake and the loss of a couple of players to injury,” Carter said. “We have to be cognizant of that and shake all of that off.”

The Cavaliers spent the weekend rallying behind their teammates, dedicating the rest of the season to them, working on how they’ll pick up the pieces and continue toward their lofty state championship goal.

“A great player is out, but our goal is still the same goal as usual,” said junior running back Santiago Villegas, who will move into the starting lineup to replace Willows. “We have to train harder every single day for a state championship.”

Villegas delivered a key touchdown against Westlake, boosting his confidence and that of his teammates. Corbin Pierce and Scott Cummings, both of whom saw extended playing time when Tevin Paul missed two games with an injury, must step up once more. Carter, though, said no one player can replace either Willows or Ochoa. The experienced players will need to take pressure off the players who are stepping in.