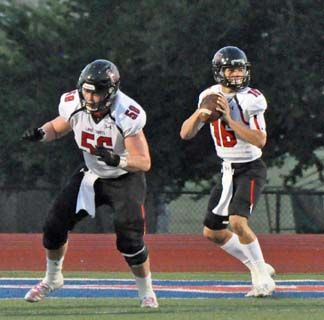 Breaking it down: how Battle of the Lakes will be won

The preliminaries are over and kickoff in the tenth Battle of the Lakes is mere hours away. What are the keys for both Westlake and Lake Travis as they prepare to take the field tonight?

Lake Travis’ defensive line features two Division I prospects in senior Tevin Paul (committed to Cal) and junior Sammy Ochoa (an Oklahoma prospect). Ends Jayden Hutchings and Garrett Womack may not be Division I recruits, but they aren’t slouches either. Last year, the foursome combined for seven of the Cavaliers’ sacks against Ehlinger. Westlake’s offensive line, anchored by juniors Joe Heironimous (6-3, 275) and newcomer Stephen Zabie (6-5, 280) must be improved.

2. Can Lake Travis’ offensive line do a better job against Westlake’s front seven?

In last year’s game, Westlake held Lake Travis to negative 15 yards rushing. The Chaps graduated four key players – Daniel Aidman, Gabe Duran, Hudson Hall and Breckyn Hager – from that unit. Can the Cavaliers’ line, led by massive tackles Brenden Jaimes and Tyler Barrett (both 6-5 and 260) and guard Jeff Gibbs handle the pressure and open up running lanes so the Cavaliers’ can be balanced on offense? Hank Carter hopes so.

3. Can Lake Travis take a punch?

Lake Travis has dominated seven opponents this season and has only struggled for the first half of the opener. Once the Cavaliers found their legs, they took off. Granted, the competition has been, well, less than stellar. Carter calls Westlake a “worthy opponent.” How will the quick-starting Cavaliers respond when things that work easily against the Andersons and Austin Highs don’t break big against the Chaps? If the Cavaliers can take the Chaps’ punch and still control the game, Lake Travis fans can expect to have their weekends planned for them into December.

We all know about the offense. Senior running back Abe Willows averages 12 yards per carry. Junior quarterback Charlie Brewer has the area’s best stats this side of Ehlinger and a bevy of targets in Cade Green, Maleek Barkley, Cade Brewer and Mac Humble – all juniors by the way. Tevin Paul and Sammy Ochoa anchor the defensive line. Fuentes, though, is the newest face.

The sophomore had a solid spring before an injury slowed him in the fall. Finally healthy, he worked himself onto the field against Del Valle playing the corner opposite senior Tanner Bush, a three-year starter. With Westlake’s ability – and desire – to throw the ball (and throw it deep), Fuentes will no doubt find himself on an island with either Reed Klubnik or Chase Cokley, two of Ehlinger’s favorite targets. Making just his third start, you can bet Todd Dodge will test him early and often. Fuentes can’t back down from the challenge or let the Chaps get behind him.

Can Jones make plays the same way Hall and Duran did, getting pressure on the quarterback and taking on blocks at the point of attack? If he – along with his defensive line and linebacking mates – keep the Cavaliers’ ground game in check, the job the Chaps’ experienced, talented secondary becomes easier.

Weather: Central Texas needs rain, badly. But if the heavy stuff – and thunder and lightning – could wait until after midnight, that’d be perfect. Both schools practice for rainy conditions on a regular basis – using wet balls in offensive drills almost every day – but the prospect of delays don’t benefit anyone. Last season Lake Travis waited through delays against Hays and in the playoffs against Spring, so they know the drill should it happen tonight. But that doesn’t mean they want to wait around, especially after starting. The Weather Channel’s gametime forecast for Westlake: up to 50 percent chance of scattered thunderstorms, temperatures in the mid-70s and humidity near 100 percent.

Fearless playcalling: Weather may come into play here, but will Todd Dodge or Mike Wall be willing to go to their bag of tricks. Wall has called trick plays in every Lake Travis game save last week, when he said the situation never lent itself to the plays he had installed. He carries up to three in each week’s game plan and hasn’t been afraid to use them. Will either playcaller resort to them, and will it be as a change to work against a certain defensive look they’ve seen or will it be out of desperation to change the momentum.